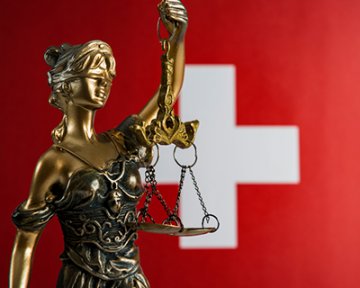 Tina Wüstemann, partner and head of the private client team at Swiss firm Bär & Karrer, is one of the top 10 private client lawyers in the world according to Who’s Who Legal’s list of ‘Most Highly Regarded Individuals’.

Chambers and Partners Global 2015 ranks her in the top tier and she has been honoured in the CityWealth Woman of the Year Awards.

She kindly took time out of a very hectic schedule to talk to Vardags about her impressive career, family and her recipe for success.

I like to start my interviews by simply asking if you’d introduce yourself and give us a bit of your personal background. Where are you from and where did you grow up?

I am a private client lawyer, based in Zurich, Switzerland. I am married to Jörg, a Swiss engineer and entrepreneur. We have two children, Lilly (14) and Benji (10).

I grew up in a small village near Zurich, Switzerland. My father was an engineer and my mother a flight attendant with Swissair. After they got married, my mum stayed at home and looked after the family. My two younger brothers and I had a very happy childhood.

What brought you to the law?

There are no lawyers in my family and it was rather a coincidence that I studied law. Although at that time working mothers were rare in Switzerland – and mothers making a career an absolute exception – I hoped I would be able to practise as a lawyer one day and still have a family.

Did you ever have any other career possibilities? What else might you have been, or with hindsight might you have liked to be if you could start again?

I would have loved to own a restaurant or hotel abroad (even though I am a bad cook). Sports teacher may also have been an option as I like all kinds of sports – particularly outdoors. However, since I started law school I have never had any doubts that being a lawyer is perfect for me.

You’re listed as being one of the ‘10 leading private client lawyers in the world’, and indeed the only Swiss lawyer named on that list. That’s an extraordinary achievement. Did you always know that you would be so successful and acclaimed?

No, I never planned any career step ahead but I was always very hard working and a good student. Before I passed my Bar exam in Switzerland, I spent a year in Sydney, Australia, working as a paralegal. After starting to work as a Swiss lawyer I again went abroad for an LLM at NYU in New York. None of these steps were planned but it just felt right at the time and I enjoyed living abroad. In hindsight, these stays turned out to be crucial for my career: I got my first job as a lawyer because of my English skills and my international experience and today my practice is very international: I am advising Swiss and foreign HNW private clients and entrepreneurs in cross-border estate and succession planning matters, including litigious trust and estate cases as well as the administration of large international estates.

I never even dreamed that I would become so successful, I was just always determined to give my best. I enjoy working as a lawyer and a partner at Bär & Karrer. It is a great firm – in terms of reputation, clients, colleagues and atmosphere.

Do you find that more is expected of you as a super-successful woman than you might if you were a man? Have you faced any particular challenges as a woman in this business?

Yes, definitely. When I started as a lawyer over 20 years ago, there were only a few female partners working in big law firms. I was made a non-equity partner with Bär & Karrer shortly after the birth of my first child. To become an equity partner took more time. I had my second child and needed time to build up my business case and my own practice. For several years I was the only female partner at the firm which was challenging sometimes. Fortunately, this has changed during the last 10 years: now we are four female partners (of a total of 40 partners), all working mums. In Swiss business law firms, this ratio is well above average.

Unlike in the UK, you take your Bar exam when you are in your late 20s/early 30s in Switzerland. By the time you become a partner you are in your mid/late 30s, usually a time when you wish to start a family. I try to encourage my female colleagues today not to rush things and take one step after the other as building up a practice and a family at the same time is challenging, to say the least. I was lucky as my husband has always supported me and, as an entrepreneur, was more flexible than others to plan his own schedule.

My colleagues Caitlin and Catherine, who have met you, are in awe of your wardrobe and sense of style. Is how you present yourself important for you professionally, or just something you enjoy?

Thank you for the compliment! The private client business is a people’s business. A lot depends on social skills and on your ability to listen and to understand the clients’ needs and visions. An appropriate appearance certainly helps. Besides that: I love fashion.

A few years ago I believe you spoke at an international conference in London on the subject of ‘dealing with messy deaths and divorces’, which was designed to delve into the perils of poor financial planning. What’s the worst case you’ve ever come across involving financial messiness?

In my role as a trust and estate litigator, I come across poor planning quite frequently. The results are often a lengthy and costly proceedings and the family’s ‘dirty linen’ washed in public. An example which comes to mind is the estate of a wealthy German couple living in Thailand, with the bulk of their assets in Switzerland, Singapore and Germany. After the death of the wife, an old will was found in a drawer under a pile of papers in their home in Bangkok. It was a joint will of both spouses, which under German law could not be revoked without the consent of the other spouse, but was not valid under Swiss or Thai law. The husband couldn’t remember that he had previously written a will. By making a compromise, ugly parallel litigation in Thailand and Germany could be avoided.

At the moment, we are dealing with a complicated structuring of a Swiss couple living in London, involving several offshore trusts comprising substantial assets, where it turned out that some of the trust deeds were poorly drafted and some trustees never validly appointed.

If you could give one piece of advice to someone just starting out in law, what would it be?

Regardless whether you study law or another subject I would recommend young students to spend some time abroad, to get to know other cultures and also to broaden their minds with jobs which do not necessarily have anything to do with their studies. I was working as a ski instructor, waitress and salesperson during my studies and made experiences which I wouldn’t want to miss and which definitely helped me in my profession.

What one piece of advice would you give to any young professional when it comes to managing their personal finances?

In Switzerland, university is free for everyone so I didn’t have to take up a loan to finance my studies. Nevertheless, I always jobbed during my studies, which allowed me to travel during the breaks and see the world.

You advise on prenuptial agreements. These have only become enforceable in England fairly recently though they’re commonplace elsewhere in Europe. Do you think that they’re a positive step for any couple getting married?

Yes, definitely. Nowadays also in Switzerland it is common that both spouses work and prenuptial agreements are quite popular. Given that also in Switzerland more than 50% of the couples get divorced, it is better to have a clear commitment at the beginning of the marriage about the financial consequences if the marriage gets sour, in particular when children are involved. Unfortunately, children are often used as a means to bargain for a better financial deal (usually against the husband, at least as far as Switzerland is concerned).

You studied in New York and I believe you’re qualified to practise law there too? How would you compare the experience of the New York legal world with Zurich, or indeed London?

Although I am admitted to the New York Bar, I never worked in a New York law firm. However, for many years I have worked with US and UK lawyers on a daily basis when advising HNW individuals with a multinational background. Unlike in Switzerland where private client lawyers advise in family law, trust and estates cases and also represent clients in litigious cases, UK and US law firms have different practice groups for each of these fields and the lawyers there are usually more specialised. While years ago common law practitioners seemed not that interested in familiarising themselves with another legal system, they are now much more focusing on international and conflict of laws aspects given that individuals are becoming more global and mobile.

A large part of your career involves working with entrepreneurs. Do you have the entrepreneurial spirit and could you imagine setting up your own business in the future?

Yes. I think it is important to have an entrepreneurial spirit, given the clientele I am advising, to understand their needs and visions. I head Bär & Karrer’s private client team and I have several lawyers working in my team. This feels sometimes like managing my own little business. I could imagine setting up my own business someday but not in the near future as I feel very comfortable where I am at the moment.

Do you ever get any time to yourself with your hectic schedule? What do you like to do to ‘switch off’ in your spare time?

Even though it is indeed sometimes very hectic I manage to get some time off for myself. I love sports and often go jogging, to Yoga classes and I also have a personal trainer. Once a year, I spend one week in a wellness hotel in Austria just by myself to recharge my batteries. The biggest stress-relief, however, is to spend time with my family and play with my children Lilly and Benji.

Finally, if you could make one change to the law (of any jurisdiction and in any speciality) what would it be?

I would wish that in Switzerland (and in other countries) refugees were allowed to work immediately. Not being able to do anything while waiting for the decision regarding their right to asylum for several months only causes frustration and problems.