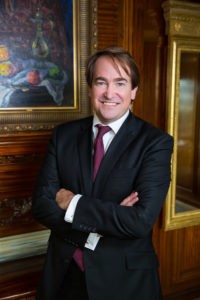 Vardags director Arron Bortoft discusses his new task of heading up the new Cambridge office, how he would change the law, and, of course, children’s parties.

Could you tell us a bit about your background?

My name is Arron Bortoft. I grew up in Tonbridge, Kent and moved up to London in the early 1990s. I moved out of London in 2010 and am currently living in the wilds of Cambridgeshire with my wife, my five-year-old daughter and our three dogs.

You have just been appointed to lead the new Vardags Cambridge office. Are you looking forward to a shorter commute?

Very much so. I am looking forward to a gentle drive through the villages to work, rather than the long-haul, crossing several time zones at anti-social hours of the morning and night, laden like a pack pony with files. The problem with commuting is that you are generally stuck in one place and however you try and use your time productively (including catching up on sleep) it always feels like dead time to some extent.

What are you most looking forward to about your new role?

I think it is very exciting to be setting off in a new direction and approaching the work from an alternative perspective. It’s going to be a challenge to build up the office from scratch. It is in a fantastic location, and with the invaluable Vardags support team behind me, I am looking forward to being up and running as quickly as possible.

Do you have any further career goals?

I think really that this answer dovetails with the answer above. It will be a distinct sense of achievement to have a successful office in Cambridge. 2016 is going to be a very interesting year.

You’re a legal executive rather than a solicitor. Why did you choose that route into the legal profession?

I think there is no right or wrong route into the legal profession: it really does depend on your personal circumstances at the time. I wasn’t someone who came out of the womb wanting to litigate, and it took me some time in life to work out what it was that I wanted to do. I began working at the PRFD Mark 1 at Somerset House in the early 90s and very quickly realised that I enjoyed family law.

Shortly after that I moved into private practice and took my legal exams at university, after work, over a period of four years, whilst also fulfilling the five years of qualifying work experience. Having started in employment, it is very difficult then to go against the flow and give up working, so the legal executive route was the perfect opportunity for me at that slightly advanced stage in my career progression. I think it was a good thing as I went into it with my eyes wide open.

How did you end up specialising in family law? And are there any other areas of law you’ve worked in that you particularly enjoyed?

My first real job was at Somerset House, so I kind of fell into family law by accident. Luckily, this gave me a good grounding in family law practice, and I realised that being involved in family law you were in a good position to interact with clients as people, which perhaps you don’t in other areas of law. The progression from Somerset House to another well-known West End family law firm cemented the fact that this was the direction that I was going to go in.

I have dabbled in both the Chancery Division and the Queen’s Bench Division, which are incredibly different beasts to the Family Division. I can’t say that I particularly enjoyed my experience, especially the Queen’s Bench division, however it gives you a good insight into how different the practices are in the different divisions. I always felt a bit like a fish out of water.

What do you consider your career highlights so far?

My career highlights are, inevitably, qualifying in 2001, and later becoming a Director at Vardags. There are also a handful of stand-out cases, that are memorable for a number of different reasons. The genuine gratitude of a client at the conclusion of their case always sticks in the mind.

What’s been the most embarrassing court experience of you life – or the worst dressing down from a judge?

Probably one of the worst was whilst I was waiting outside court to see a judge and I was looking up at the circular up-light in the ceiling above me. Once I was called into court, on looking down, my vision was completely blinded and I had to fumble my way into court, unable to see much. Luckily it only lasted for a few seconds before my vision returned, but it was quite a long few seconds. Not an ideal way to start a hearing, but luckily it was ex-parte so I had no client or opponent, just a judge looking at me in a slightly odd fashion.

We have all had our mobile phones go off in court, and it’s only happened to me once. The judge insisted I left the court to answer the call. I explained that I could simply turn it off but the judge, bizarrely, made me leave the court in order to turn it off, before returning some five seconds later.

Where do you stand on courtroom dramas – love them or hate them?

It really depends on the circumstances. It always gets the blood pumping when there are moments of tension or drama in court, but if you are on the wrong end of it, it is often an uncomfortable experience. A heated cross-examination, which cracks open the case, is always a good moment, but more often than not they are quite civilised and not remotely similar to Suits, Ally McBeal or even LA Law (for the older generation).

How do you strike a work/life balance – if you do – and how do you unwind in your spare time?

This is often one of the hardest things to do for any lawyer. The mind often wanders back to work at weekends, in search of the answers to the particular problems that present themselves, even if you are not physically working. I find I get my best clarity at about 3am, in that half-asleep state. It’s not uncommon for me to get up and write things down, in case I have forgotten them in the morning, which sounds very sad.

I generally spend my spare time with my family, walking the dogs, visiting country pubs, or fishing down on the river. Although, now my daughter has turned five, it seems to be a merry-go-round of children’s parties every weekend. That’s not a complaint by the way, and it is impossible to think about work when surrounded by twenty hyperactive screaming children, fuelled on cake.

If you could unilaterally enact one reform in family law, what would it be? No fault divorce, reduced duration of spousal maintenance perhaps?

The requirement for a CMS assessment before the court has jurisdiction to make an order in respect of child maintenance, to me, seems unnecessary and a further hurdle to overcome, which can often play into the hands of a disruptive father or husband.

Inevitably the current divorce process has had its day. If two people want to get divorced, they can always find a way to do so, and so placing antiquated barriers in their way does seem rather pointless. I would also question new reforms in terms of the court service, and their approach to dealing with the administration. Obviously, finances and staff are stretched, and it is not a straightforward equation, however there always used to be ’the court’s charter’, which gave strict deadlines for how the public were dealt with, and how documents were dealt with. I am not sure if it even exists anymore.

What advice would you give to an aspiring lawyer, and would you encourage them to follow your example and go the legal executive route?

I think it depends on the person and their circumstances. I would certainly always advocate the legal executive route, as I believe it gives you a very firm grounding in the actual practice itself before you qualify. I have seen many lawyers who have taken law degrees, or conversion courses, who have gone into law and become very disillusioned very quickly, as it is not what they expected, before moving on to other professions. I found out it was hard work first, and that motivated me to get involved even more.

Certainly, the legal executive route allows you to go into law at a slightly later stage. Historically, there may have been some professional snobbery, but I think the distinction between the various strands of lawyers after the Legal Services Act 2007 is much less emphasised. From my perspective, the legal executive route has been a first-class opportunity to build a career from a slightly different platform.