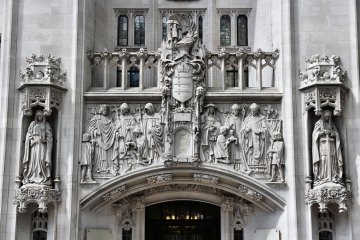 In February of this year, the story of Graham and Maria Mills hit the headlines as the ex-wife was granted increased maintenance payments despite the ex-husband’s attempt to end them entirely. Determined to challenge spousal maintenance payments for life, Mr Mills has set up a JustGiving page to raise the funds to take his case to the Supreme Court.

When the parties divorced in 2002, Mr Mills, the chairman of a successful surveying company, agreed to give his ex-wife a lump sum of £230,000 to buy a house for her and their son, and monthly payments of £1,100. Although he settled on an ‘open-ended’ maintenance obligation, Mr Mills returned to court in 2014 to request to end the payments now that their son was older and he had another family to support. Within this time, Ms Mills had spent all of the lump sum on property investments and had run up debts. Her QC told the court that she was “unable to meet her basic needs” even with the spousal support, and had got into financial trouble after many years of living as a single parent with health problems. Ms Mills continued to support their son, now 23, who was still in full-time education and living at home. In February 2017, the judge decided not only to protect the maintenance payments for life but also to raise the monthly sum to £1,441.

Furious with the Court of Appeal’s decision, The Telegraph reports that Mr Mills has now resolved to take his case to the Supreme Court. Feeling like he has been made responsible for “her mismanagement of finances”, he intends to change the law of England and Wales so that men are no longer obliged to give their ex-wives a “meal ticket for life”:

“I simply cannot lie down and accept this ruling. Too much is at stake. Forget about me; this is for every person who’s been shafted in the divorce courts.”

Mr Mills also considers the ruling a failure for feminism as he interprets it as proof that judges are overly paternalistic. He believes that decisions like this discourage women from standing on their own two feet and regaining independence after a divorce.

According to The Telegraph, Mr Mills was overwhelmed with support and sympathy following the judgement from both men and women. Echoing his thoughts that the courts are “out-dated and dangerous” and patronising towards women, Baroness Deech has also voiced her support for the campaign: “Our judges are very old fashioned. They are over-chivalrous, the way they were in the 19th century”. She herself has tabled a bill calling for maintenance payments to be capped at three years, similar to the Scottish system.

In order to escalate the issue to the Supreme Court, Mr Mills, who spent £50,000 on the original case, needs to raise a further £50,000. Inspired by supportive strangers offering to help him afford his legal bills, Mr Mills decided to crowdfund. He has now launched a campaign on JustGiving titled ‘Divorced men: doomed to life as a cash machine’ which so far has brought in 10% of the desired total.

In contrast to her ex-husband’s new-found following, Ms Mills has been consistently barraged with criticism. After being victim to internet trolls, she hit out with an article titled ‘I’m NOT a gold digger’ where she defends herself and the court’s decision, exposing the facts that the mainstream media omitted. Ms Mills explains that, initially, she was the one who supported her husband financially and she helped him establish his business. In stark opposition to Mr Mills, she believes the divorce system is weighted in favour of men:

“I genuinely believe women get the rough end of the stick after divorce. They have to juggle working and bringing up the family. Whereas men can just focus on themselves and their career.”

Indeed, for all of Mr Mills’ claims that the courts “don’t treat women as being strong and capable of independence”, it is heartening to see the court respect Ms Mills’ enormous contribution to childcare and its sensitivity towards her significantly reduced earning capacity following medical complications.

Throughout the campaign, Mr Mills has taken a very gendered approach. He has stressed that it is men who are disadvantaged by the courts, writing on his JustGiving page: “I see this ruling as not only completely unfair for me, but one that has implications for all men”. However, the law sees marriage as a partnership and does not make these decisions based on gender, but on who contributes what. It just so happens that, because of inequalities already existing in society, in the majority of cases it is the husband who is the principal breadwinner and the wife the homemaker, but even this is beginning to shift.

As Mr Mills’ campaign has only raised a small proportion of the total sum needed to take the case to the Supreme Court, it is currently impossible to tell how successful he will be in banning life-long maintenance payments. It is clear that there is an appetite for change but the courts, in deciding whether breadwinners are unfairly treated in divorce, will have to ensure that they don’t end up disadvantaging the homemaker.

Comedy duo Ben Stiller and Christine Taylor divorce as friends
This site uses cookies. Find out more. Continued use of this site is deemed as consent.   CLOSE ✖