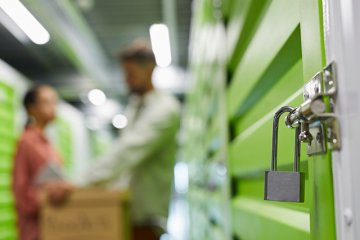 We always say that it’s important to see the big picture when going through a divorce, and not to fight over petty things.

But self-storage company Big Yellow Storage has conducted a survey among new customers with regard to their storage needs, and they’ve found that it’s not quite that easy.

According to their blog, possessions are one of the biggest causes of arguments among divorcing couples, coming second only to the financial arrangements. Their survey found that 13 percent of Brits admit to arguing over possessions just for the sake of it. “Nearly half of Brits admit to hiding possessions during the break-up just so they could keep them”, says the blog.

The study reveals that on average, £394 worth of possessions are disposed of in anger, with 16 percent of people having thrown away items totalling over £500. Despite the financial impact of throwing away items, couples feel more regret when items of high sentimental value such as photos, keepsakes and heirlooms are lost forever.

In fact, 33 percent of Big Yellow’s customers turn to the storage company when they have an event in their life triggering a need for storage, quite often divorce.

From a legal perspective, it is worth reminding clients that items worth over £500 should be disclosed in the Form E. It is common for divorcing couples to say that they hope to be able to come to an amicable decision regarding the value of the assets, but in circumstances where such agreement cannot be reached, the couple should think very carefully about the value of their possessions, both in and out of storage.

Anyone thinking of hiring a storage unit specifically to hide valuable items should think twice: the courts will not look favourably on anything but full and frank disclosure.

Pensions and Part III of the Matrimonial and Family Proceedings Act 1984
This site uses cookies. Find out more. Continued use of this site is deemed as consent.   CLOSE ✖