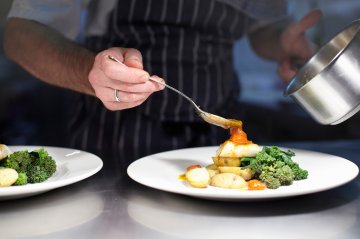 Yesterday, the Michelin-starred chef, Heston Blumenthal, was granted decree nisi in his divorce from his wife of 28 years, Zanna. The pair’s determination to agree on a financial settlement outside the court is a shining example of a couple resolving their financial matters autonomously and amicably.

The Telegraph reports that Zanna (Susanna), 52, and Heston, 50, met as teenagers when he was working as a credit controller and she was a nurse. They married in 1989 and now have three adult children: Jack, Jessie and Joy. The couple separated in August 2011 and Zanna now lives in Marlow and Heston in Barnes.

Remarkably, the parties, who wish to remain friends, spent six years sorting through their finances and legal fees before petitioning for divorce. This was no mean feat as, together, the pair transformed the 450-year-old Fat Duck restaurant in Bray into one of the top eateries in the world. In 2005, The Fat Duck was in fact voted Number One in the World’s 50 Best Restaurants, despite its fame for dishing out snail porridge. Heston also owns a chic restaurant called Dinner in London and Melbourne.

However, with three children, the business assets were not the only contribution to consider. In an interview with Woman & Home, Zanna described herself as “pretty much as single parent” as Heston spent such a huge proportion of his time working. Having once been hailed by Heston as the reason for his success, Zanna is entitled to half of the fortune built up during the marriage as UK courts make no discrimination between the contributions of the homemaker and breadwinner.

Once the couple were each content with their sums, Zanna went ahead with the divorce proceedings. Satisfied that her petition was sound, District Judge Anne Hudd of Central Family Court did not hesitate to grant the pair, who were not present at the hearing, a decree nisi. She reportedly commented that Zanna was “entitled to a decree of divorce, the marriage having irretrievably broken down, the facts found proved being two years’ separation with consent”.

By organising the finances between each other outside the court, the Blumenthals have avoided the difficulties and drama of court-ordered financial settlements. Assuming that both parties were totally honest about all the assets involved, their commitment to dividing the finances independently will enable them to conclude proceedings smoothly. However, for couples where one party is reluctant to give full and frank disclosure, or where the split is acrimonious, this method is unlikely to offer a successful solution without the security of court orders and sanctions.

The provision of information. In financial remedy proceedings, parties are required to disclose evidence of their financial circumstances.

Geniuses in the family courts: how 'special' was Ryan Giggs' contribution?
This site uses cookies. Find out more. Continued use of this site is deemed as consent.   CLOSE ✖