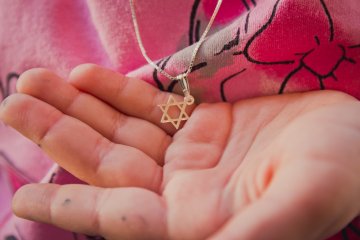 A former Hasidic mother from Brooklyn has regained custody of her three children two years after a judge ruled that she had violated a religious upbringing clause in her divorce agreement. Chava Weisberger and Naftali Weisberger divorced in 2009, years after Ms Weisberger told her husband that she was sexually attracted to women and "could not tolerate" having sex with men.

In a 2008 stipulation of settlement, the parties agreed to joint legal custody of their three children, with the mother having primary residential custody and regular visitation for the father. The family had lived in accordance with the Jewish Hasidic practices of ultra Orthodoxy, and the stipulation contained a religious upbringing clause for both parties to "give the children a Hasidic upbringing in all details, in home or outside of home, compatible with that of their families". The father would, the parties agreed, decide which school the children were to attend and the mother would make sure that they would "arrive in school in a timely manner and have all their needs provided."

Four years later, the father sought sole legal and physical custody of the children on the grounds that his ex-wife had "radically changed her lifestyle in a way that conflicted with the parties’ religious upbringing clause." This included, he alleged, publicly coming out and having "disparaged the basic tenets of Hasidic Judaism in front of the children". Additionally, children had been permitted to wear non-Hasidic clothes and failed to observe the Sabbath and kosher dietary laws while in their mother’s care. Mr Weisberger further took issue with the fact that the mother had "dressed immodestly" and allowed a transgender man to live in her home.

The father denied that the mother’s sexuality had, in and of itself, motivated his motion to alter the custody arrangement but stated that he had expected her to keep her sexuality hidden from the children, due to his belief that homosexuality violated the Torah.

Pending the determination of the father’s motion for sole custody, the Supreme Court of the State of New York awarded him temporary residential custody. A temporary order of visitation on consent dated 5 December 2012 provided that the children would split the week between both parents’ homes. Per the order, the mother was to: "encourage and practice full religious observance in accordance with the practices of Emunas Yisroel in the presence of the children," and "in the Boro Park community, the shall dress in the modest fashion."

Ms Weisberger testified that she complied with this provision but "felt hypocritical for doing so" and that she was "hiding parts of herself" from her children. She opposed her ex-husband’s motion for sole custody, pointing out that she had been the children’s primary caregiver for their entire lives and that she worried for their emotional well-being while in the care of their father.

Due to the existence of the religious upbringing clause, the court determined that it "was obligated to consider the religious upbringing of the children as a paramount factor in any custody determination." In 2013, the mother had filed a notice of motion to modify this clause, to allow her to provide her children with a conservative or progressive modern orthodox Jewish upbringing in a gay-inclusive environment, as opposed to a strictly Hasidic one. She did, however, agree to the father continuing to teach the children all aspects of a Hasidic upbringing. The Supreme Court of the State of New York did not grant the mother’s motion.

With the mother having adopted a secular, though culturally Jewish, lifestyle, the court found that she was not compliant with the clause. Accordingly, in 2015, Judge Eric Prus awarded the father sole legal and residential custody of the children. The mother was awarded unsupervised visitation from Monday afternoon until Thursday morning, but this would be reduced to supervised, therapeutic visits if she continued to fail to comply.

Unhappy with the ruling, the mother appealed to the Appellate Division of the Supreme Court of the State of New York, which found that "undue weight" had been given to the religious upbringing clause. Drawing on New York case law, the appellate court found that such clauses ought "only be enforced so long as the agreement is in the best interests of the children". Quoting Friederwitzer v Friederwitzer:

Further, the Appellate Division found that the father had "failed to demonstrate that it is in the children’s best interests to award him sole legal and residential custody of the children", particularly in light of the fact that Ms Weisberger had been the children’s primary caregiver since birth. The record "overwhelmingly" demonstrated that the mother had always met her children’s physical and emotional needs, and her ex-husband expressed no concerns in this regard.

The Supreme Court of the State of New York had, the ruling continued, "improperly directed that enforcement of the parties’ stipulation of settlement required the mother to practice full religious observance...during any period in which she has physical custody of the children". Providing the children with a Hasidic upbringing did not necessitate the mother herself following such a lifestyle. To demand such would amount to a constitutional violation: a religious clause cannot be enforced so as to violate "a parent’s legitimate due process right to express oneself and live freely."

Though the court found that it was in the children’s best interest for the father to require that they adhere to the Hasidic practices of ultra Orthodoxy while in his custody, the Appellate Division modified the religious upbringing clause "to allow each parent to exercise his or her discretion while the children are in his or her care or custody." The mother would not, it followed, be required to conceal her true identity from her children.

The Appellate Division ordered that shared legal custody be reinstated, with the mother granted residential custody once again. Though the children would cease to live with their father, the frequency of the father’s visitation was increased from the initial stipulation of settlement. As she had agreed in her failed motion to modify the religious upbringing clause, Ms Weinberger was to continue to keep a Kosher home and the father would have additional visitation for Jewish holidays.

In closing, the ruling acknowledged the court’s limitations when it comes to devoted parents who, save for occasional lapses in judgment, both strive for the best upbringing for their children but have very different ideas as to what this entails.

The parties’ religious, moral, and ethical beliefs and values with respect to raising their children, while once compatible, have now become incompatible in many important respects. courts do not always have the perfect solution for all of the complexities and contradictions that life may bring—the parties must forge a way forward as parents despite their differences.

The court cannot make a value judgment on the various merits or shortcomings of a religious upbringing versus a secular one, save for how they impact on a particular child’s welfare. In the case at hand it was found that the children would be best served by continuing to practice the faith into which they were born and raised, but that did not require the mother to lead by example. Maintaining consistency is, per New York case law, a "positive value", though not one that carries decisive weight -meaning that if upholding the status quo was found to to impinge on a child’s welfare, a different order could have been made. One thing is for sure, though: a child’s best interests must always take precedence over any binding agreement entered into by their parents.

Couple takes battle to legalise heterosexual civil partnerships to the Supreme Court
This site uses cookies. Find out more. Continued use of this site is deemed as consent.   CLOSE ✖