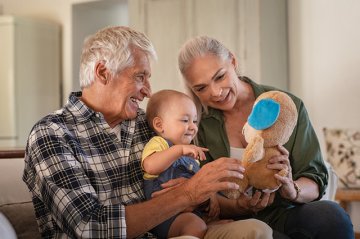 The paternal grandparents of a three year-old boy have been granted the right to raise him, despite a social worker claim that they might be too old to cope with his future behavioural problems.

During the family court hearing in Bournemouth, social services pressed for the child to be adopted after his parents – a father who has exhibited "sexual deviant behaviour" and a mother who had a history of engaging in relationships with "high-risk men" – could no longer care for him.

However, the grandparents contested this, arguing that they should be allowed to raise the child. They had a strong and long-established relationship with the child that they argued it would be beneficial to maintain, rather than having him thrust into the care of strangers.

Judge Richard Bond ruled in favour of the couple, whose ages have not yet been reported. Judge Bond described the grandfather, a company boss, as being clear-minded and articulate, who clearly had his grandson’s best interests at heart. He told the court:

He made it clear that the boy’s welfare is paramount in his and his wife’s thinking… He did not understand why others might doubt that.

The social workers had asserted that the grandparents might not fully understand the implications of caring for the child, who was at risk of growing up with behavioural problems, given his difficult childhood so far.

I am of the view that they do now fully understand the nature of the commitment they would enter into. The grandparents are fully capable of caring for the boy.

This case comes only a month after reports emerged of a three-year-old girl in Essex allegedly being put up for adoption after social workers deemed her grandparents too old to care for her. The grandparents in question are now said to be appealing against the decision to place the child in foster care.

Overcoming gender bias in child relocation cases
This site uses cookies. Find out more. Continued use of this site is deemed as consent.   CLOSE ✖