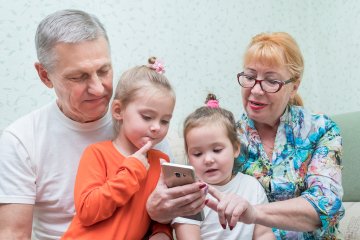 With the next general election in sight, David Cameron, speaking at an event in North London, has suggested that grandparents who take care of children are getting the "raw end of the deal", and could be included in an expansion of the parental right to paid leave and more financial help.

Grandparent Plus, the national charity which champions the vital role that grandparents play in children’s lives, has suggested that there are 200,000 grandparents in Britain who are looking after 300,000 children without being entitled to the financial benefit or right to paid leave that adoptive parents will be entitled to from next year. Mr Cameron said:

"You do see grandparents stepping in and effectively bring up children, and of course, under the rules they don’t get quite the same rights as others".

The government had previously dropped plans to pay grandparents for looking after children under the Government Child Care Voucher Scheme due to fears that the system would be too open to false claims.

The Children Act 1989 focuses on the ’welfare of the child’. While this is an admirable test, the concept of a ’nuclear family’ has gradually become somewhat outdated, and the law should perhaps reflect the idea that grandparents often play a vital role in the wider family that cares for a child. Whether in times of great stress, if a parent falls ill, or sadness if the family suffers a bereavement, or where it is simply not economically viable for the parents to leave work or pay for childcare, it is hard to argue that a child’s welfare would not be better served by being cared for by their grandparents rather than a stranger (all things being equal).

As the law currently stands, grandparents do not have automatic rights when it comes to their grandchildren, and often they are completely disregarded by the law, unless they can demonstrate that it is in the child’s best interest to have contact with or otherwise spend time with them. This often requires court involvement and can be an incredibly costly and time-consuming process.

Let us hope that Mr Cameron promotes the rights of grandparents in his General Election Manifesto, to ensure that they are granted the same entitlement to paid leave and financial help as adoptive parents.

Update 04/11/2016: Cameron did indeed include grandparent rights in his manifesto but the UK is yet to see a change in legislation.

Ayesha joins grandparents' rights discussion on ITV's This Morning
This site uses cookies. Find out more. Continued use of this site is deemed as consent.   CLOSE ✖