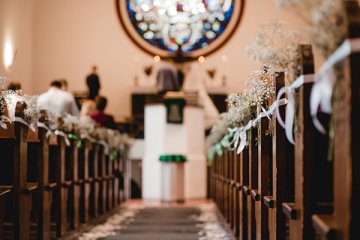 Is there an optimum time to get married? Or rather, if you don’t get married by a certain point, is your marriage more likely to fail? Nicholas Wolfinger, a long-haired sociologist from the University of Utah has been researching just that, and he’s now published his findings.

It seems that the optimum time to marry is in your late twenties, because by the time you get to your early thirties your chances of divorce start to rise.

Wolfinger, who is a Professor of Family and Consumer Studies at the University of Utah, asserts that up until the age of 32 each additional year of age at the time of marriage reduces the odds of divorce by 11 percent. But – and here’s the bad news – after that point the odds of divorce increase by 5 percent per year. What’s more, this held true after variables such as sex, race, education and religious tradition had been discounted.

Professor Wolfinger conducted his research by looking at data collected between 2006 and 2010 from the National Survey of Family Growth (NSFG). An insight into his methodology can be found here. There are also some graphs to show the surprisingly dramatic increase that occurs in the likelihood of divorce after 33 years of age.

This seems to diverge from past research, Professor Wolfinger explains, which saw the likelihood of divorce decrease as the age at the time of marriage increased.

He then goes on to explain:

For instance, some people seem to be congenitally cantankerous. Such people naturally have trouble with interpersonal relationships. Consequently they delay marriage, often because they can’t find anyone willing to marry them. When they do tie the knot, their marriages are automatically at high risk for divorce. More generally, perhaps people who marry later face a pool of potential spouses that has been winnowed down to exclude the individuals most predisposed to succeed at matrimony.

This may well be an issue that rings true for many.

What we can take away from this, it seems, is that there is, sociologically speaking, a very small window in which to get married with a high chance of that marriage lasting. Too early or too late and you may be unwittingly complicit in the ultimate doom of your own relationship.

Alternatively, these findings could be taken with a pinch of salt and it may be advisable to spend less time worrying about divorce risk and more time finding a partner who’s right, at any time of life.

Divorce with an international element: How to win your jurisdiction race in the EU
This site uses cookies. Find out more. Continued use of this site is deemed as consent.   CLOSE ✖