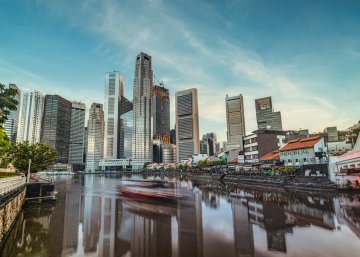 A Singaporean man, whose name has not been released because the case involves a minor, is set to appeal the Singaporean court’s decision which left him unable to adopt his biological son who was born via a surrogate in the United States in 2013.

The Singaporean doctor, having previously been told that the Ministry of Social and Family Development would be unlikely to “recommend adoption of children by a homosexual couple”, travelled to the United States and paid a surrogate $200,000 US dollars to carry the child. When the child was born he brought it back to Singapore to be looked after by himself and his partner, with whom he has been in a relationship for 13 years. Upon his return to Singapore, he started adoption proceedings to “legitimise his relationship with the child” but his application was rejected.

The law on surrogacy varies from country to country. In the UK, although not enforceable, surrogacy contracts are not illegal unless the surrogate has been paid, beyond reimbursement of expenses. In the US, there are several states where both commercial and altruistic surrogacy contracts are allowed. Judge Nair explained that Singapore does not condone surrogacy arrangements and that the use of IVF is confined to married couples. It was also pointed out that, as a doctor, the father must have been aware of this. Further, the child was born in the US “precisely because it was not possible in Singapore”, so the father could not then “come to the courts of the very same jurisdiction to have the acts condoned”.

There were concerns that, through this application, the father was attempting to obtain various associated benefits such as citizenship rights “by walking through the back door of the system when the front door was firmly shut”. Indeed, the citizenship of the child was carefully considered as, if a child has been adopted, “male Singaporeans are generally eligible to sponsor their children for long-term stay in Singapore” according to the Immigration and Checkpoints Authority. The father therefore wanted to ensure that they would not encounter problems further down the line. However, the judge concluded that, even though the child may benefit from obtaining Singapore citizenship if he was formally adopted, “there is no evidence” that the child would definitely obtain citizenship. This was not therefore viewed as a strong enough argument to justify the adoption order.

A further argument put forward by the father was regarding the welfare of the child, who is now 4 years old, and how the formal adoption would improve the relationship. However, the judge was in agreement with a senior research fellow at the Institute of Policy Studies who suggested that there would be no change to the “parent-child bond” as a result of this decision. The child would be remaining in the care of “loving people” and would therefore have adequate food and housing regardless of whether there was an adoption order in place. The rejection of the adoption application will not alter the arrangements in any way as the child will continue to be in the father’s care.

A common concern surrounding surrogacy in general, which was also raised in this particular case, is the exchange of money. In this case, a large sum was paid to the surrogate mother. Judge Nair said that “the very idea of a biological father seeking to adopt a child after paying a surrogate mother a sum of US$200,000 to carry his child to term reflects the very thing the Adoption Act seeks to prevent – the use of money to encourage the movement of life from one hand to another”.

The child’s parents are, understandably, concerned about the long-term arrangements given that the child has only remained in Singapore on a tourist visa, a long-term visit pass, and dependent passes and these could be denied. Although no date has yet been set, the appeal will be heard by the family division of the High Court in Singapore.

Mothers told to contact their abusers for maintenance
This site uses cookies. Find out more. Continued use of this site is deemed as consent.   CLOSE ✖