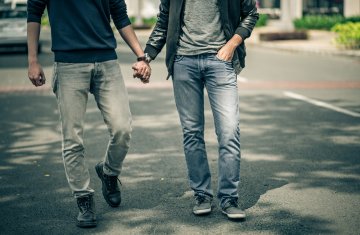 Leandro Barreto and François Souyri, a couple who first entered a civil partnership in 2008, have been told that they will need to get divorced if they want to relocate to France with their adopted son.

Both France and the UK allow same-sex marriage but the rules of the two legal systems have fundamental differences, leaving some same-sex couples in ‘limbo’.

Under the Marriage (Same Sex Couples) Act 2013 in the UK, those who originally entered into civil partnerships were able to convert their union into a legally recognised marriage. The marriage certificates issued for this are backdated to the original date of their civil partnership.

In order for a marriage to be legally recognised in France, there must be a ceremony with witnesses and the marriage certificate must reflect the date of the wedding itself.

Barreto and Souyri had their marriages converted under UK law, backdated to the date of their civil partnership. This makes their marriage incompatible with French law. Not only does this leave them in ‘limbo’, it also means that their son’s adoption is not legally valid in France. This would mean that if anything were to happen to the two fathers, their son would have no rights in France. In order to recognise the adoption, the marriage would have to be recognised.

The couple did make an effort to get married in France but only ran into further complications. The marriage was not able to go ahead because they are married in another country despite the fact that the marriage itself is not recognised in France. Their only option would be to divorce in the UK in order to be re-married in France, something Barreto considered "outrageous". He told PinkNews: “It’s nonsensical. Even if we wanted to do it we have no grounds to divorce".

The conflicting rules in both the UK and France have left multiple couples facing the issue. The discrepancies of the two legal systems on the recognition of a legally valid marriage paired with the UK not recognising no-fault divorce makes the situation particularly difficult. A spokeswoman for the Foreign Office said that the UK was “aware that some couples are facing the issue” but it was “a matter for the French government”.