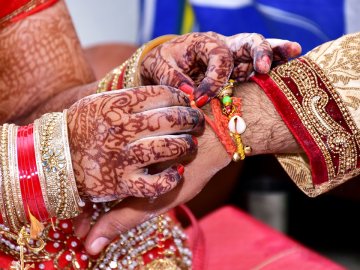 The Forced Marriage Unit (FMU) has published its statistics for the year of 2016. This joint Home Office and Foreign & Commonwealth unit, established in 2005, gives advice and support to potential or actual forced marriage victims. The statistics reveal the international reach of British nationals being forced into marriage but, as forced marriage is a hidden crime, the data does not convey the full scale of the abuse.

Forced marriage is one of the many areas in which family and criminal law intersect. Just as domestic violence is categorised under both family and criminal matters, forced marriage can also straddle the two systems. After pressure from groups such as Freedom Charity, The Anti-Social Behaviour, Crime and Policing Act 2014 was brought in to make forcing someone to marry a criminal offence. Section 121 (1) stipulates that a person commits an offence if he or she:

Then section 121 (3) adds that a person commits an offence if he or she:

In the family courts, the only form of punishment prior to the 2014 legislation was through proceedings for contempt of court after a breach of a forced marriage protection order (FMPOs). These orders cover whatever the court thinks necessary to prevent a forced marriage, including stripping individuals of their passports. But now, the 2014 Act has amended Part 4A Family Act 1996 to introduce section 63 CA which reinforces the penalty of breaching a family FMPO with the potential of up to five years imprisonment. The FMU statistics for 2016 provide information about forced marriages which occur inside the UK and also overseas, where they provide support for British nationals, including dual nationals. The victims ranged from young children to adults post-retirement age, with 15 percent of cases involving those under 16 years of age. The largest proportion of cases (35 percent) concerned 18-25 year olds. Within the UK, London was, as predicted, the region with the largest number of cases (307 in total). The report specifies that forced marriage is “not a problem specific to one country or culture” as it covers cases relating to over 90 countries, but it does give a list of the ‘focus’ countries with the highest rates of forced marriages. Pakistan, with 612 cases, was the country with by far the most incidents (43 percent). The second country listed, with 8 percent of all recorded forced UK marriages was Bangladesh, then India was noted third with 79 cases. Somalia and Afghanistan both account for 3 percent of the forced marriages, and Saudi Arabia for 1 percent. It is notable that 11 percent of forced marriages (157 cases) occurred entirely within the UK, with no overseas element. Of the total of 1,428 cases dealt with by the FMU over 2016, 80 percent involved female victims, and 20 percent male, proving that forced marriage is not solely a women’s issue. One matter raised by the report is that a huge 80 percent of the calls and emails that FMU receive are from professionals and third parties, not the victims. This further demonstrates the vulnerability of the people involved as so few report the abuse themselves for a number of reasons, including fear of the consequences of speaking out. With the 2014 criminal act in place and the changes in the family courts, combined with a growing number of pressure groups, hopefully the ugly reality of forced marriage will be pushed further into the spotlight. However, until more victims start to report the crime themselves, it may be difficult to fully understand the extent to which this archaic abuse continues underground. To read the statistics, click here

Security v Stability: leave to remove and financial provision in G v S [2017] EWHC 365 (Fam)
This site uses cookies. Find out more. Continued use of this site is deemed as consent.   CLOSE ✖