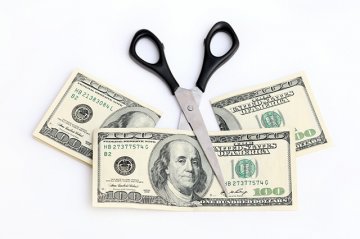 For an English readership, the idea that a man in Germany had taken the 50/50 division of assets to its literal extreme may have evoked a wicked sense of schadenfreude. Perhaps that explains how quickly the story went viral.

But its popularity exceeded the confines of England, being reported by Fox News in America and the Metro here in the UK and even reaching media organisations in Russia and Iran.

According to the reports, a video posted on YouTube by an account bearing the name Der Juli apparently showed a man named Martin G ‘redistributing assets’ after a breakup. The video, entitled Für Laura (For Laura) showed him taking a set of power tools to his (and presumably, Laura’s) possessions, dividing everything literally in half.

The result was a series of household objects, ranging from a bed to a Mac laptop, cut ruthlessly yet somewhat tidily, in half. The severed bicycle even looked rather artistic.

According to the video, Martin G would send his wife’s halves to her by post and sell his halves on eBay. For example, his portion of the car was allegedly being sold for £2. He exhorted potential buyers to “contact my ex” if they wanted the other half too.

To his ‘ex’ he wrote: “Thank you for 12 ‘beautiful’ years Laura! You’ve really earned half.”

However, it has since emerged that For Laura is nothing more than a hoax. Not a practical joke, but a rather an innovative marketing ploy. It was in fact created by Deutsche Anwaltauskunft, an information site and online magazine for the German Bar Association to warn people of the potential pitfalls of failing to get decent legal advice on divorce.

The first red flags as to the story’s veracity could perhaps have been detected when none of the news outlets that ran it seemed to be able to agree on whether the man had actually been married to ‘Laura’ or not.

However, the story clearly struck a chord with disgruntled exes across the world, who were quick to believe the stunt. It seems particularly understandable in England and Wales, where finance on divorce begins from the starting point of a 50/50 division of assets; this can amount to a 50% tax on the wealth that a couple built up during the marriage.

Despite the revelation that the story is a hoax, the ‘halves’ of all the items used in the video do actually exist – though as nothing more than props – and Deutsche Anwaltauskunft will nevertheless be genuinely selling them on eBay.

The 1 minute 35 second video has at the time of writing racked up over 6 million YouTube hits. News of the German Bar Association’s claim was itself soon trending on the BBC, so, all in all, a rather ingenious bit of PR. Now, if only the same thing could be said of that couple in Canberra…

'Joint lives' maintenance awards fall in North
This site uses cookies. Find out more. Continued use of this site is deemed as consent.   CLOSE ✖