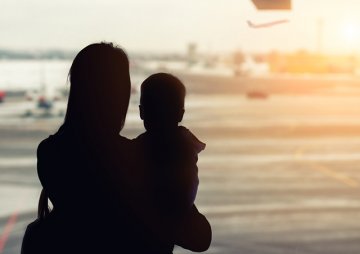 The Supreme Court has unanimously allowed the appeal of a Moroccan father whose child was brought to the UK wrongfully by his mother.

In the matter of J (a child) UKSC 70 concerns a young boy, named Saleem in the judgment, whose parents are both Moroccan but with Moroccan and British citizenship. The couple lived in England with Saleem initially after he was born in 2007, but later moved to Saudi Arabia and then Morocco.

The marriage broke down in December 2011, after which the local Family Court in 2012 granted the mother residential custody and the father visiting rights. The mother moved to England in January 2013 and remarried, leaving the child behind in the care of maternal grandparents in Morocco. She brought Saleem to England in September 2013, and he has lived there ever since with the mother, her new husband and the child she has since had with him. Saleem’s father had not seen him face to face since he left Morocco.

In September 2013 the father applied unsuccessfully to the Family Court in Morocco for residential custody. He then brought proceedings in the High Court, requesting an order to make Saleem a ward of court and gave directions for his summary return to Morocco.

The judge found that the father had not consented to Saleem’s removal from Morocco, and furthermore that the removal was ’wrongful’. He also found that the mother, father and child were all habitually resident in Morocco before the mother removed the child. He ordered the summary return.

(i) that the judge had erred in his consideration of the expert evidence, by failing to allow oral evidence and cross-examination, and by drawing the wrong conclusions from it; (ii) that in considering the child’s welfare and the Cafcass report, (a) he failed to carry out a sufficiently deep, thorough and realistic analysis of the child’s welfare needs and wishes, (b) was unclear as to the approach adopted, and (c) erred in his evaluation of the welfare considerations; and (iii) that he erred in failing to consider article 9 of the 1996 Convention.

The Court of Appeal ultimately held that the English courts did not have jurisdiction under the 1996 Convention, or on any other basis, in this case. The reasoning was that, when a child is habitually resident in another state, jurisdiction only arises in cases of urgency under article 11 of the 1996 Convention. Article 11 offers an additional jurisdiction to the state where the child is present, but only in these urgent situations, which are limited. The court held that this condition did not apply here, because the father could have made an immediate application in Morocco for a return order.

The Supreme Court has now granted the father permission to appeal, on the grounds that the English courts can exercise article 11 jurisdiction in cases of wrongful removal. Lady Hale, giving the unanimous judgment, ordered that the case be returned to the High Court to consider whether it would be appropriate to exercise the article 11 jurisdiction in this case, given the facts. The court will also consider whether an order for interim contact can be made between Saleem and his father, who have not seen each other for two years.

This case is the first time that the UK Supreme Court has considered the 1996 Convention. The 1996 Convention came into force in the UK on 1 November 2012. To give it its full title, it is the Convention of 19th October 1996 on Jurisdiction, Applicable Law, Recognition, Enforcement and Co-operation in respect of Parental Responsibility and Measures for the Protection of Children.

Coincidentally, Morocco was the very first signatory to the 1996 Convention, signing on 19 October 1996, the day that the Convention was completed; it was also one of the first to ratify on 1 December 2002.

India bans commercial surrogacy for foreigners
This site uses cookies. Find out more. Continued use of this site is deemed as consent.   CLOSE ✖