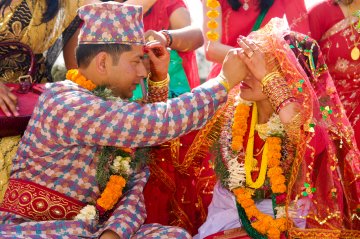 Monika Shahi Nath, 40, was assigned male sex at birth and raised as a boy called Manoj in rural Nepal. Nath described growing up; how she had always wanted to sit with the girls at school and how she began experimenting with women’s clothes. When she reached her twenties, she would travel to nearby cities to spend days at a time living as a woman, away from her family, afraid that she would shame them. Nath’s identity as a woman had not previously been openly discussed in her family and her return home with her new husband was one of her first steps towards revealing it. She said that her marriage to Yogi has made the situation with her family easier, and that they now truly see her as a woman:

"I never dreamed that one day I would be someone’s wife, that I would be loved as a daughter-in-law".

Nepal is known for having some of the most progressive policies on homosexuality and gender identity in South Asia – Nath was also the first Nepali to obtain a passport with the ‘other’ gender designation back in 2015. Since 2007, homosexuality and changing gender have been legal in Nepal, and the country has also banned discrimination on the basis of sexual orientation.

“I am blessed to be someone’s wife, but the government needs to make the legal changes so people can easily marry the person they love”.

There are some concerns that the couple could face allegations of polygamy as Yogi was already married with two children. While polygamy is not uncommon in Nepal, it is still illegal and punishable. The Muluki Ain, Nepal’s legal code, dictates that no man shall marry another woman during the life-time of his wife or where the conjugal relation is not dissolved unless his wife has an incurable venereal disease, is insane, infertile or blind. If the woman becomes a second wife knowingly, she is also culpable. However, even if both partners are punished, the law does not invalidate the second marriage itself.

These concerns aside, Nath said that she hopes this marriage would break the stereotypical thinking of Nepali society and “will pave way for other transgender to live their life with dignity and without hiding the identity as a transgender”.

Modernising e-working in the family jurisdiction
This site uses cookies. Find out more. Continued use of this site is deemed as consent.   CLOSE ✖