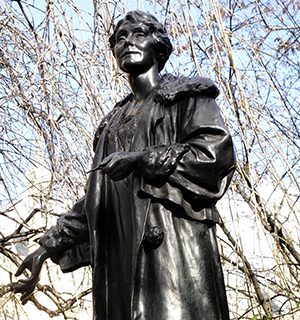 My last blog looked at Suffragette and what it had to tell us about parental rights, but it only briefly touched on the topic of adoption, which the film does address. To recap, Maud, the main character, having joined the suffragette movement and been kicked out of her home, makes one final attempt to see her young son Georgie, only to find that her husband has arranged for him to be adopted by a rich couple.Adoptions of this kind were common practice in 1912, the year the film takes place, and had been for hundreds of years. If a family couldn’t take care of one or more of their children, or if a woman became pregnant out of wedlock, finding a family to take in the child was an oft-used solution.As adoption was mostly informal for much of British history it’s hard to estimate how many took place, but a quick Google search will show you just how many people are looking for the relatives that were lost in this process.It wasn’t until 1926 and the passing of the first Adoption Act that there was any legal framework for adoption. This act introduced the need for consent from the current parent(s) or guardian(s) of the child being adopted before an adoption could take place, and after the Guardianship of Infants Act 1925 gave married women legal rights over their children, it’s entirely possible that Maud, or a woman much like her, would have been able to prevent the adoption from happening.

That said, there were a number of provisions written into the law for cases where the child had been abandoned or neglected, and it wouldn’t have been impossible to argue that Maud’s actions, which at one point in the film see her let go from her job, counted as both of those. Adoption laws have changed a lot over the years. In 1976 adoptees gained the right to see their original birth certificate and other information relating to their biological parents, while the Children and Adoption Act 2006 focused on ensuring that when children are adopted from overseas the process is both safe and legal. Though it seems like we’re playing catch-up in terms of legislation when it comes to adoption it’s clear that in the past 81 years things have improved greatly for all parties involved. These days not only Maud but her son and the rich couple looking to adopt him would have rights, and the entire process would much more be fair and transparent. Image ‘Annie Kenney and Christabel Pankhurst’, photographer unknown, public domain.

Common intention constructive trust: ‘unclean hands’ no bar to cohabitee claims
This site uses cookies. Find out more. Continued use of this site is deemed as consent.   CLOSE ✖