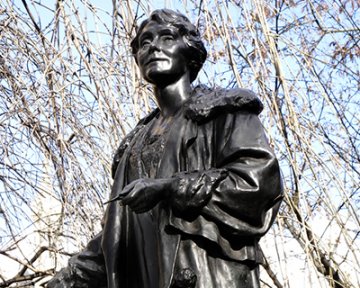 Sarah Gavron’s recent film Suffragette has received mostly positive reviews, despite its inaccuracies and omissions, but not all the critics are impressed. Maud, the film’s main character, is what Gavron describes as a “composite” character, one made up of various stories about suffragettes, but who never actually existed.

That, coupled with the film’s failure to include any of the non-white women who were part of the suffragette movement has left many people less than pleased. With all that in mind, one of the biggest questions I had was how well Suffragette did at accurately representing the aspects of family law it employed. When I went to see the film at the cinema, there was one scene in particular that moved everyone in the audience to tears. After Maud has been kicked out by her husband Sonny (played brilliantly by Ben Whishaw) she makes one last desperate attempt to see her son, only to find that Sonny has found a rich couple to adopt young Georgie. Despite Maud’s protests, Sonny insists that, as Georgie’s father, he has the right to decide, and has decided he doesn’t have the resources to care for a child. Though it’s not explicitly stated, the script implies that Maud has no legal rights over her son and is forced to hug him one last time, beg him to remember her, then watch the rich couple take him away. Unfortunately, unlike Maud’s character, this part of the film isn’t fictional. The Custody of Infants Act, which allowed non-adulterous mothers to be granted custody of children under seven, and have visitation rights to older children, was passed in 1839, seventy two years before the film takes place. That was all very well for women who were divorced, but while still in a marriage, the father retained rights over any children the couple had. For working class women in 1912 one of the biggest barriers to divorce was the cost, and the film, for all its faults, gives a very clear impression of how seriously the court took those women (in other words, not at all). Even the Married Women’s Property Act of 1870, or any of its subsequent revisions, did not cover children (I know I know, but the law, historically, had a bad habit of classing people as property). It wasn’t until 1925 and the passing of the Guardianship of Infants Act that married women were granted equal rights over their children. Mr Justice Lawrence called this “an insult to God”. So for all its historical inaccuracies, when it comes down to the parental rights aspects, Suffragette was on point. As for little Georgie and his adoption, well, that’s a discussion for another time.

Baroness Hale calls for children’s voices to be heard
This site uses cookies. Find out more. Continued use of this site is deemed as consent.   CLOSE ✖