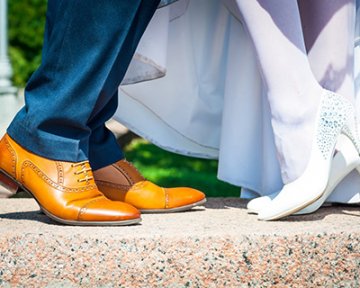 It was a whirlwind six years for Jodie and Michael Fox. In 2006, the long-time university friends married. Three years later, alongside their co-founder and friend Mike Knapp, they launched Shoes of Prey -Jodie’s brainchild, an e-commerce website where women could design their own shoes. Fast-forward to 2012, and business was booming, but the Foxes’ marriage had broken down.

Despite their divorce, Jodie and Michael continued to spearhead their business, with Jodie as chief creative officer and Michael as chief executive. To date, the company has secured more than $24 million USD of private investment funding and has moved from the pair’s native Australia to an LA base.

Speaking to the BBC, Jodie has fond memories of working with her then-husband during the early years of Shoes of Prey:

“Working with my husband was amazing because so few people are lucky enough to be able to see their partner in action, doing well in meetings, seeing how they work with others.”

But it wasn’t all wedded bliss, with Jodie citing the difficulty to maintain the boundaries between work and their personal life as a cause of conflict:

“At the end of a work day… it was hard to simply give unconditional support for blowing off steam, rather than get into a conversation about what each of us saw in that event.”

As the marriage fell apart, the pair endeavored to ensure that their personal heartache did not impede the business, with Jodie stressing that their eventual split was “very amicable”. In the Foxes’ case, the proof that divorcees can make effective business partners is, as they say, in the pudding. Since relocating to the USA, Shoes of Prey have opened up five physical stores and have “big plans for expansion”.

So, what should we take away from Jodie and Michael’s story? Did building a successful business cost them their marriage? Kathy Marshack, Canada-based psychologist and author of Entrepreneurial Couples, thinks it’s not quite that simple. She told the New York Times that “couples working together was the norm for most of human history”, citing family-run farms as an example. She argues that “blaming the arrangement for an increase in fighting is wrong” and “the real issue is that with increased time together, you have more time for conflict”. However, working together isn’t necessarily what generates that conflict -unemployed couples or those on holiday may experience a similar effect -just look at the marked rise in divorce enquiries the follows the end of summer holiday season.

Running a business with an ex-spouse

Glenn Musk, an entrepreneurship professor at North Dakota State University who spent 14 years researching couples in business notes that, following divorce, “couple-owned businesses tend to fold, get sold, or have one partner buy the other out”.

This reflects what is known as the “clean break” principle in family law whereby, after a divorce, “neither party has any continuing financial claim on the other”, thus enabling parting couples to “move on with their lives”.

However, a clean financial break is not always realistic or even desirable for many divorcees, who would rather weather the storm of working with a new ex, than bid farewell to the business they’ve poured blood, sweat and tears into.

Entrepreneur recommends that couples in this situation seek legal, as well as emotional, back-up:

“Sit down with a mediator with business and financial background to find out the specific options in your business, whether that means continuing to work together, having one person buy the other out of the business or shifting roles.”

For Jodie and Michael, their business was worth preserving their working relationship.

As their story shows, by maintaining clearly defined roles, a basic level of trust, and a lack of bitterness, parting couples who work together need not sacrifice their professional dreams in order to move on with their respective personal lives.

Widow loses out on £6M divorce settlement after husband dies during proceedings
This site uses cookies. Find out more. Continued use of this site is deemed as consent.   CLOSE ✖