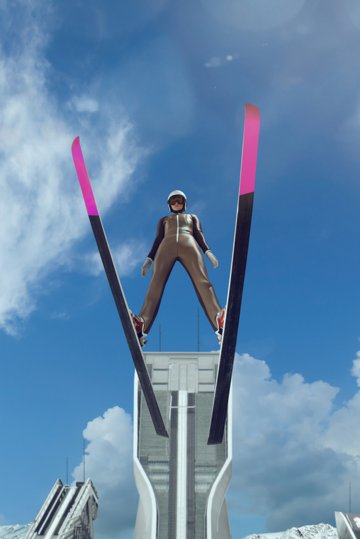 Michael Edwards, better known as “Eddie the Eagle” has announced his divorce. The former Olympic ski jumper was married to Samantha Morton for 13 years.

The couple wed in Las Vegas in 2003 and went on to have two daughters, now aged eight and eleven.

“The divorce has only been finalised two months but we’ve been separated two years. It’s been the worst two years of my life. The darkest, definitely…”

“But…you’ve got to think life can give you some bad knocks, no matter how hard you’re knocked you’ve got to get up.”

Eddie “The Eagle” found stardom after representing Great Britain in the 1988 Winter Olympics ski jump event. He qualified for the event largely because there were no other British applicants.

Edwards finished last, but soon became a media darling. He earned as much as £10,000 an hour for promotional appearances, according to the Daily Mail. He also set a British ski jump record of 73.5 meters.

Despite his initial success, Edwards declared bankruptcy in 1991. He claimed a trust had invested his funds poorly, and went on to study law in order to reclaim his funds. He received an estimated 30 percent of the amount in an out-of-court settlement.

The Olympics have since tightened their qualification standards, and now require competitors to be in the top 50 or the top 30 percent of athletes worldwide. Edwards wished to compete in the 1992 and 1998 Winter Games, but was unsuccessful.

About his experience as an unlikely Olympian, Edwards said, “Getting to the Olympics was my gold medal. It didn’t matter that I came last. It was the fact that I got there against all the odds.”

A film about Edwards’ life will be released on March 17th in London and on April 1st in cinemas countrywide. Eddie the Eagle stars Hugh Jackman and Christopher Walken.

Superdry founder sells £48 million worth of shares to fund his divorce
This site uses cookies. Find out more. Continued use of this site is deemed as consent.   CLOSE ✖