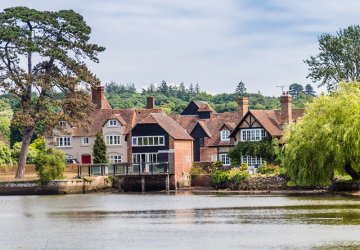 As a family law firm working for high net worth individuals, Vardags has found through its presence in Winchester that there are around four times as many divorce enquiries from Hampshire as there are in other counties. This makes a clear point about what may happen to assets on divorce: there’s a lot to lose, not least being Lord of the Manor in Hampshire.

Hampshire offers rich rewards for entrepreneurs who want to sample its rural – and urban – delights and become local landowners. The recently published Sunday Times Rich List offers a hint of this. Jim Ratcliffe, founder and chairman of the chemical giant Ineos, comes in at number 40 on the list. He hit the national news recently when it was revealed he plans to alter his luxury home on the edge of the New Forest, winching it up with %27a network of hydraulic jacks under his luxury home which would raise it safely above the new sea level%27, according to The Times. As the modern day mansion overlooks the sea, it is hoped that this will save it from rising sea levels in the future – a very high-tech version of future-proofing one’s assets.

Ratcliffe, said to be worth around £2,500million, is not alone in being a local Lord of the Manor. His local New Forest, as well as county town Winchester, are popular choices for those who have made money in the city to stake a claim in rural property or enjoy a spot of yachting. Just across the water on the Isle of Wight, around 5 percent of the housing stock is attributed to second home owners. That’s what 55 miles of coastline, award-winning beaches and over 50 percent of the land being designated an Area of Outstanding Natural Beauty will do for those who want a sea view and a bit of an investment.

But Ratcliffe may be on to something when it comes to future-proofing. Not necessarily, in his case, in the fight against the worst effects of climate change, though that may help. Marital breakdown is something that may be a cause for concern if you have a high volume of assets. In this increasingly global England, many people from all over the world who have made their homes here will also want to get divorced here. England is famous for its generosity to homemakers and has seen many record payouts pass through its courts.

Indeed, along with the Sunday Times Rich List comes the realisation that many of the women on it have found themselves there either through inheritance or through divorcing wealthy men. When last year’s list was published, much media fuss was made about the fact that only two women on it – JK Rowling and shoe entrepreneur Tamara Mellon – were self-made millionaires. On top of this, the latest census reports into second-home owners all over the country found that there were more than twice as many male second-home owners as female.

There are ways to future-proof, to weather the emotional and financial storms as Mr Ratcliffe plans to weather literal – and indeed littoral – storms. You can plan to protect your assets through marital agreements or, once you’ve made a decision to break up, getting the best advice you can, as soon as you can, is the best way to ensure you mind your manors. As Hampshire novelist Jane Austen once put it: ’Marriage is indeed a manoeuvring business’.

The biggest bigamist? Woman allegedly married 10 times, never filed for divorce
This site uses cookies. Find out more. Continued use of this site is deemed as consent.   CLOSE ✖