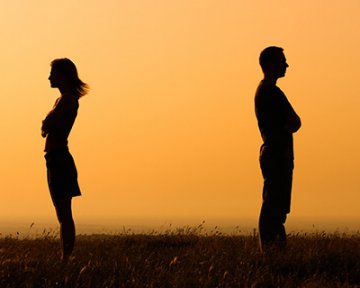 For the first part of our series on divorce in history and culture, we begin at a point before divorce existed: 1215, the year the banns of marriage was introduced. The banns are a process where a couple who wish to marry must state their intention to marry along with the date of the wedding.

The announcement must be made three times before the event, and exists so that anyone who knows a reason why the marriage cannot take place will have a chance to say so – or forever hold their peace. It’s a process that’s still in effect today, though perhaps not for much longer. But where did the banns come from, and why?

Before the introduction of these banns of marriage, people were free to marry as soon as they wished. Given that there was no obligatory marriage ceremony or any official form of registration, it was a pretty easy process. There were, however, stipulations, such as not already being married, and not being related to the person you wanted to marry.

In the 13th century, “being related” was a larger concept than what it’s legally considered to be today in terms of marriage: if you shared a great, great, great, great, great grandfather then the Church considered this too close a familial connection to marry. Of course, with marriages being so easy to come by, it wasn’t hard to slip through the net. If it later transpired that one of these rules had been broken, then the marriage would be annulled. This is where the problem began.

The banns were introduced because by 1215 this process was being abused. According to Professor David d’Avray of University College London, men, usually those of high social standing, would marry women, then produce documents claiming that they were distantly related and therefore have the marriage annulled.

At this point in history, marriages were for life, and it would be several centuries before Henry VIII brought divorce to this country. Short of killing the wife, there was no other way to have a marriage dissolved. This marriage-annulment cycle became such a problem that the Church developed a system – the banns – to make sure everyone in the area knew of a couple’s intent to marry and could raise any objections. At a time when communities were small and international travel was far less easy, this seemed like a perfect solution.

Unfortunately, the banns didn’t work quite as they were intended to. It was still possible for those who travelled to have multiple secret wives and, even locally, if the banns weren’t observed then a marriage would be annulled.

Still, the banns stuck, and are observed today almost exactly as they were when first introduced.

Their future existence, however, is not guaranteed. In 2015, it was announced that the Church of England was considering scrapping the process, calling it ‘outmoded’ in such a mobile society. A motion to do so was put to the General Synod in 2017 but was narrowly defeated.

While we may see an end to the banns at some point in the future, they are currently a requirement for anyone wishing to marry in a church, so should definitely factor into any wedding plans.

Parent, prosecutor, divorcee: the courtroom criticism of Marcia Clark
This site uses cookies. Find out more. Continued use of this site is deemed as consent.   CLOSE ✖