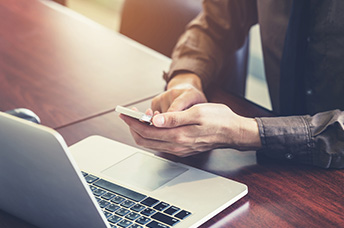 In the age of apps, it seems as if a smartphone can streamline every part of our lives. Now, even divorce can be done via a handheld screen.

Separate.us allows customers to complete, file and serve divorce papers from their phones, just as one might order a takeaway. The service costs between $1,000 and $3,000.

Wevorce, founded in 2012 by Michelle Crosby, offers divorce services starting at $749—the average divorce in the United States costs $27,000, according to Slate. Wevorce aims to make the separation process more collaborative, ensuring that neither party is overly disappointed when the terms are finalised.

The app may be onto something; only 2 percent of the divorcees who used the platform ended up settling in court. Moreover, a typical ‘wevorce’ happens in less than 90 days, while more traditional divorces usually take a year or more.

An app by Avvo, an online legal services marketplace, throws in a 30-minute phone call with legal counsel as part of their divorce package, which starts at $995.

Josh King, Avvo’s general counsel and consumer advocate, said: “For better or for worse, technology has made it easier for people to split.”

However, King warns that smartphone divorces aren’t for everyone. “The critical thing is that you don’t have a lot of disagreements or complicated externalities,” King said, according to CNBC. “These products are designed to cover a wide range of people that have a fairly routine legal problem.”

As enticing as it may seem to end a relationship as easily as starting one on Tinder or the like, experts say there’s more to divorce than swiping left.

John Slowiaczek, president-elect of the American Academy of Matrimonial Lawyers, proclaimed: “If they have no assets and no children, you can do one of those divorces, no harm, no foul.” However, a slew of complications, including alimony, child support, debts and investments, can thwart online divorce proceedings. A smartphone separation may end up costing more in the long run than a divorce that involved lawyers from the start.

Slowiaczek recommends putting as much care into the divorce as was put into the wedding. “You have to put it in perspective,” he said. “When you look at divorce it’s the rest of your life.”

Eddie The Eagle announces divorce
This site uses cookies. Find out more. Continued use of this site is deemed as consent.   CLOSE ✖