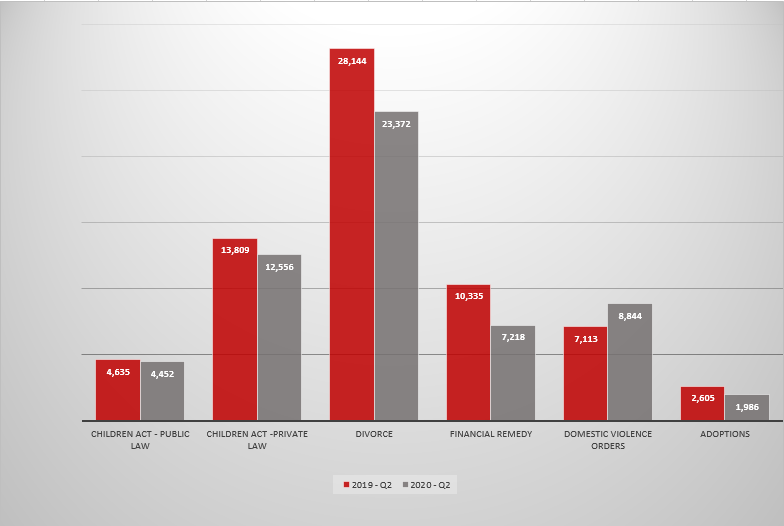 Figures released by the Ministry of Justice have highlighted the effect of Covid-19 on the family courts, with the total number of cases between April and June falling by 13% compared to the same period last year.

This overall decrease has been driven by significant falls in a number of case types, with financial remedy and adoption cases falling by 30 per cent and 24 per cent respectively.

While almost all types of case have decreased compared to 2019, there is one distressing outlier: the amount of domestic violence cases which began during this period have increased by 24% on last year.

The primary reason for this decrease is clear –  the effect of Covid-19 restrictions on the court system. This is noted in the statisticians comment which accompanied these figures, which stated: “During the initial Covid response, administrative and judicial resource was a significant challenge, resulting in a number of courts suspending operations for a period.” This led, the comment continues, to “unprecedented falls in volumes.”

The effect on divorce cases

Between April and June 2020, 23,372 divorce petitions were filed in England and Wales. This constitutes an 18 per cent decrease from the same period in 2019. The number of decree absolutes granted also fell by 5 per cent, with 23,196 being issued.

Alongside administrative pressures, another potential reason for the fall in new cases is more individual. During times of upheaval, many choose to delay significant changes in their lives. Indeed, in 2009, the year after the financial crisis, divorce rates fell to their lowest level for any time since 1974.

These figures also illustrate the shift, made necessary by the pandemic, in how divorce cases are conducted. In 2019, only six per cent of decree nisis were processed digitally during this period; in 2020, this rose to 49 per cent. Similarly, the proportion of cases to be held digitally at all stages increased from 28 per cent in 2019 to 54 per cent.

As these statistics only extend until June, numbers may have once again picked up. In fact, it is very likely they have. This was something noted by the report itself, which stated that: “As society and the economy begins to recover from the impact of Covid-19, it is expected that case volumes will return to historic trend levels and may even temporarily exceed the pre-covid-19 volumes as the backlog of cases is processed.”

As before, individual factors will also likely play a role. Across the world, as restrictions were lifted, divorce applications surged. It has long been predicted that the UK would see a similar spike and while this quarter may have seen a decrease across the board, this trend is likely to be dramatically reversed by the time of the next report.

The new normal? Florida court holds first ever fully virtual jury trial
This site uses cookies. Find out more. Continued use of this site is deemed as consent.   CLOSE ✖