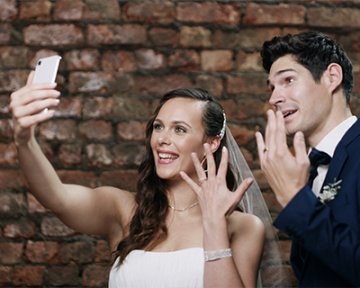 Technology may be making it easier to maintain relationships over long distances, but few couples have considered tying the knot over Skype. Canadian Megan Radford and Bolivian Rolando Barrientos are the exception—while they were together in Bolivia during their wedding, the officiate and guests joined them from Canada via video chat.

Radford and Barrientos met in Bolivia last September, and have been in a long-distance relationship ever since.

“We talk all the time about how Skype, WhatsApp and instant messaging made our relationship possible,” Radford told the CBC.

Radford worked in the church relations department of World Vision, where Barrientos was a translator. They met on a rural project, and continued to talk over Facebook messenger and Skype when Radford returned to Canada.

Far from the distance putting a strain on their budding relationship, the pair seems to credit technology with making their bond stronger.

“We couldn’t really do the normal things that people who starting to date do,” Radford said. “All we could was talk about what was such a concentrated way of getting to know each other.”

Barrientos added, “Skype just helped us know a little more about how we live, our conditions and how to express our minds.”

After a month of online dating, Barrientos planned his proposal. He asked Radford’s parents for their blessing over Skype.

“I was a little surprised,” Radford said. “I guess never say something is crazy. I would have said this was crazy before.”

Radford travelled to Bolivia in February for the wedding. Her fiancé met her at the airport, where they shared their first kiss.

Unfortunately, paperwork delays and what Radford called “unprofessional officials” forced them to postpone. As her visa was set to expire before she and Barrientos could be wed, she opted for an unorthodox solution: asking her father, who is ordained, to officiate the wedding over Skype.

Barrientos and Radford may be married in the eyes of God and the Internet, but not under Bolivian law. They are currently raising funds on GoFundMe so that Radford may return to Bolivia to be legally married. They eventually hope to live together in Canada.

EU referendum: an uncertain future for families
This site uses cookies. Find out more. Continued use of this site is deemed as consent.   CLOSE ✖