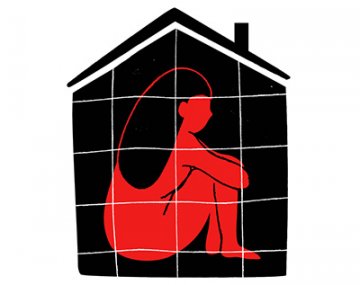 A wealthy couple tied up and imprisoned their maid after the wife hatched a plot to use her as a way of obtaining a divorce, a court has heard.

Businessman Zekri Gris, 56, initially hired Niressa De-Vincente, 36, to look after their four children and to clean the family’s £650,000 home, but his wife had other plans. Dina Gris, 35, offered Ms De-Vincente £200 to sleep with her husband and record it, so that she could use the recording as evidence and divorce Mr Gris on grounds of adultery.

However, according to several news sources the plot failed or backfired. It’s unclear exactly how that happened, whether Ms De-Vincente refused Mrs Gris’s offer, or if something went wrong further down the line.

Whatever the answer, Mr Gris then accused Ms De-Vincente of stealing £12,000 from him, following which he and his wife tied her up with rope and handcuffs. She was kept prisoner in Gris home for three days, during which Mr Gris threatened her with a knife and ordered her to “confess”.

It was only after 36 hours, while the Grises were absent, that she was able wriggle free. Using the rope with which she had been imprisoned, she climbed from the window and ran down the street, whereupon she was spotted by the Gris neighbours and the authorities were alerted.

The hearing was held at Bristol Crown Court, where Mr Gris pleaded guilty to one count of false imprisonment. He was jailed for three years. Mrs Gris admitted the same charge and will be sentenced at a later date.

Ms De-Vincente began working for the Grises after her student visa expired and her residency in the UK became illegal. Prosecuting the case, Ian Penny said “Many illegal immigrants are vulnerable and exploited, whether they are stuck in Calais or crossing the ocean in an inflatable dingy or fall into the clutches of the defendant and his wife.”

To read more about grounds for divorce, click here

The top 10 reasons why divorce petitions are returned
This site uses cookies. Find out more. Continued use of this site is deemed as consent.   CLOSE ✖