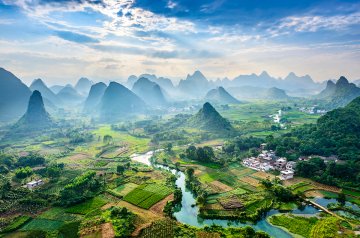 Residents of Jiangbei, a small village in China’s Jiangsu Province, have been rushing to file for divorce to take advantage of a loophole in a demolition compensation scheme. After being informed that the village would be erased to make way for a new high-tech industrial park, 160 couples have registered their divorce.

As compensation for the demolition, the villagers are being offered a 220 square metre house or a 70 square metre house and a hand-out of 131,000 yuan (£15,500). However, married couples would miss out on the deal because, rather than being counted as two individuals, they are seen as a single unit. In order to both get the maximum benefit from the compensation scheme, couples of all ages- including pensioners- have been scrambling to divorce. According to The Nanjing Morning Post, the vast majority of the couples are divorcing for pure financial gain and will continue to live together, or remarry, after the split.

Despite all this opportunism, the couples’ efforts may be scuppered by regulations put in place to discriminate between ‘real’ and ‘fake’ divorces. The Telegraph reports that only couples who registered their divorce through a local office of civil affairs five or more years ago would be eligible for the housing and remuneration. However, the villagers have also found wriggle room in this regulation by paying lawyers to confirm their separation. Riding off the back of this sudden influx of work, some law firms are charging more than $2,000 for their services.

As the rumour spreads about Jiangbei residents swapping their marriage for a new property, couples in other areas of Jiangsu Province have started to file for divorce. The Demolition and Relocation Office is aware of the loophole in the system but has not yet confirmed whether they are varying the compensation for these demolition divorces.

This is in fact not the first time such a story has reached the news. Only last May, huge swathes of villagers from Daocao’ao in Yunnan Province divorced after finding out that their homes would be bulldozed.

Nor is this the first time that Chinese couples have been inversely incentivised by the property market to divorce. In September 2016, married couples in Shanghai filed for divorce in their numbers to benefit from the 30 percent down payments offered to first-time homebuyers, in contrast to the intimidating 70 percent to be paid upfront for those investing in a second property. Couples divorced, registered their home under one party’s name then bought a new property in the other’s name to take advantage of the fantastic offer for those buying for the first time.

It may seem cynical to trade in a happy marriage for financial perks but this recurring trend in China is perhaps indicative of a wider shift, showing how the country’s traditionally conservative stance towards marriage is starting to flex from modern pressures.

Supreme Court grants survivors’ pension to unmarried cohabitee
This site uses cookies. Find out more. Continued use of this site is deemed as consent.   CLOSE ✖