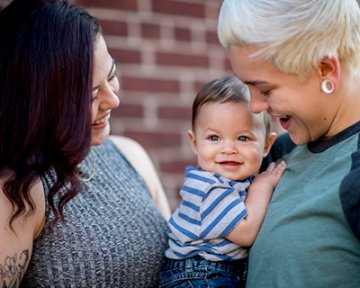 The Journal of Developmental and Behavioural Paediatrics recently published an article comparing the well-being of children with same-sex parents, to that of heterosexual parents’ offspring. In what could finally settle the debate over the legitimacy of gay parenthood, the results found no significant differences.

Same-sex and Different-sex Parent Households and Child Health Outcomes: Findings from the National Survey of Children’s Health reviews the data generated by the US National Survey of Children’s Health (NSCH) and analyses the findings of the University of Amsterdam and Columbia University. The NSCH has been conducted 3 times in the last 15 years providing data on “multiple, intersecting aspects of children’s lives – including physical and mental health, access to quality health care, and the child’s family, neighbourhood, and social context.”

Same-sex parenting has become increasingly more common in the US, despite the recent erosion of various gay rights in many States. It has been estimated that there are approximately 690,000 same-sex couples living in the US. There has long been a social question as to whether the children of same-sex relationships are in any way negatively affected by having parents of the same gender. This article and survey have concluded that the well-being of children is far more contingent on the quality of family relationships rather than the structure of the family (i.e. different-sex parents and same-sex parents).

The NSCH survey provided an opportunity to observe whether family relationships, parenting stress or child outcomes are different in a comparison between same-sex and different-sex two-parent households; and whether associations among family relationships had a different impact on child behaviour and well-being. The research from the survey analysed 190 couples and compared familial elements including their household, parenting style, stress and the effects on biological children. Families were matched for comparison using various criteria including, the age of the parents and their children, parent’s level of education, and the children’s gender.

The study noted that same-sex couples exhibited a marginally higher level of parenting stress than their different-sex counterparts, although one of the study’s authors Dr Gartell has attributed this to same-sex parents feeling greater social pressure to “to justify the quality of their parenting more than their heterosexual counterparts.” A survey conducted in 1996 by the US National Longitudinal Lesbian Family Study (NLLFS) appears to support such a view, as its results suggested that 41% of adolescent children of same-sex parents felt they had experienced social stigma associated with their mother’s sexuality.

However, in all other respects the children of same-sex parents showed similar results to the children of different-sex couples in terms of their general health, learning behaviours, and physical development. In 1994 the National Longitudinal Study of Adolescent Health was conducted in the US comparing teenagers with same-sex parents and different-sex parents. This study supported these more recent finding, that children have similar emotional and physical development from either family type. Negative emotional well-being was found only in children with unstable parental relationships, regardless of the sexuality or gender of the parents.

The Williams Institute at the University of California in Los Angeles (UCLA), also used the national statistical data to research the children of US families with both same-sex and different-sex couples. Similarly, UCLA noted the heightened stress of same-sex parents, positing that this could be due to feeling that their parenting is being judged more critically, due to feeling like they are in the social spotlight. However, this study confirmed that there were no other significant differences found between the different households. There was no noticeable correlation between the sexuality or gender of the parents and the emotional well-being and development of their children.

These studies are important for developing a general understanding of the make-up of society, but also as information for public bodies and governments (i.e. doctors, legislators, local authorities) who are often consulted on issues of same-sex parenting and families. The results demonstrate that there is no significant impact on children in correlation to the sexuality of their parents, will inevitably also assist in the more general social debate.

Fiction vs Family Law: Carol and morality clauses
This site uses cookies. Find out more. Continued use of this site is deemed as consent.   CLOSE ✖