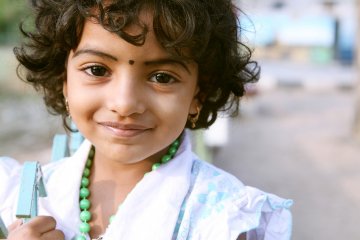 Mr Justice Bodey has granted a mother permission to proceed with an application on behalf of her child for British citizenship. In a pioneering judgment, in which he considers the concept of ‘nationality’, Mr Justice Bodey concluded that having British nationality will not “impinge on her sense of being an Indian girl” and that arguments in favour of her retaining Indian nationality “seem to be more abstract and, although important, more theoretical”, than the arguments for her having British nationality.

The case Re K (A Child) involved cross applications that were made by a mother and father in respect of their 6-year-old daughter. The child had been born in India but her mother, who had by then been living in England for over seven years, only went back to India when she was six months pregnant for the benefit of wider family support during the birth and the child’s early infancy. She returned to the UK when the child was 5 months old and the child has resided in the UK ever since.

Following the acrimonious breakdown of their marriage, the mother sought an order from the court that would enable her to proceed with an application for British citizenship on behalf of the child. This would require the child to give up her Indian nationality on account of the fact that India does not permit dual nationality. This application was strongly opposed by her father. At the same time he made a cross application for a 50/50 shared care arrangement and permission to take the child on holiday to India. Simultaneously, the mother applied to reduce the child’s contact with her father and opposed his request to take the child on holiday to India.

The case was complicated by criminal proceedings that had been brought against the mother by the child’s paternal grandparents in India. These grandparents sought custody of the child and also alleged that the mother had falsified and forged immigration documents in order to obtain a Visa in the UK. The child’s paternal grandfather had notified the Home Office of the criminal proceedings in India.

The father argued that the Indian High Commission should be involved in the case. This put Mr Justice Bodey in mind of the case of Re E EWHC 6 (Fam) in which Sir James Munby discussed good practice in situations of the court dealing with children who are foreign nationals. However, his remarks were expressly referable to care in public law proceedings. After examining the Consular Relations Act 1968, Mr Justice Bodey concluded that it seemed to him, at least provisionally, that the court is not obliged in private law proceedings to notify the national consular offices of a child who is a foreign national. It is a matter of discretion. He reasoned that the majority of private law proceedings involving a child of foreign nationality, where a Children’s Guardian is in place would not require notification of consular authorities, as “this would generally be disproportionate and cause unnecessary work and clutter all round”.

In this case, however, he concluded that the nationality issue meant that it was appropriate for the Indian consular authorities to have been notified of the fact of the proceedings. The Indian Consulate was duly notified but, at the time of judgment, there had been no response.

Mr Justice Bodey dismissed the father’s application to move to a 50/50 regime. He also dismissed the father’s application to be permitted to take the child to India for a holiday due to the risk that the child would not be returned to the UK. Further, Mr Justice Bodey concluded that although the Indian courts would attach weight to an English order, it was likely that if the child was not returned, the parties would still have to go to court in India. In his view, the Indian criminal proceedings might have the effect of influencing the Indian court against the mother’s case for the return of her daughter to England.

The more interesting aspect of the judgment, however, relates to the determination of the child’s nationality. As there was no obvious authority directly on this point, Mr Justice Bodey was forced to make a decision based on the facts of the case alone. He did accept that “a child’s nationality is not to be changed lightly, especially when it is not by the joint consent of the parents”. However, he also accepted that obtaining British nationality would bring the child’s legal status into line with what for her is the reality and she would have the nationality of the country where she has lived all her sentient life. On the other hand, however, he did consider the father’s argument that to retain her Indian nationality would be to respect her rights as an individual and her cultural and national status. The father’s argument was that any change in her nationality should be a matter for her, when she is an adult.

After careful consideration of all the factors, Mr Justice Bodey concluded that the welfare of the child would be better served by her having British nationality than by her retaining her Indian nationality. In his view:

“it would secure her status in the strongest possible way here, namely in the only country which she knows as her home. It would not impinge on her sense of being an Indian girl.”

President of the Family Division expresses his support for settlement conferences
This site uses cookies. Find out more. Continued use of this site is deemed as consent.   CLOSE ✖