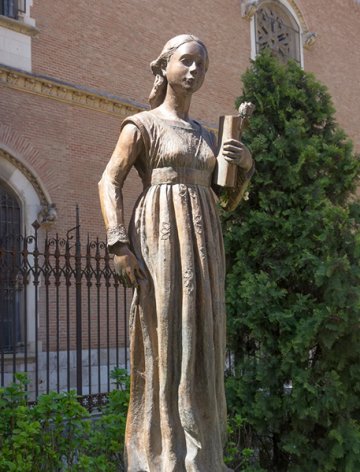 A letter from Catherine of Aragon, which asks for help from the pope to prevent her marriage being annulled, is up for auction in Paris.

Henry VIII’s scorned first wife wrote the epistle to a Roman Catholic cardinal, Francisco de Quiñones, a relative of hers, begging him to help her by asking Pope Clement VII to refuse to grant the annulment. Written in Spanish, the letter is dated 3rd October 1529.

Having previously been married to Henry’s brother Arthur until his death, the widowed Catherine of Aragon then married Henry when he was a mere 18 years old. She was queen of England from 1509 until her marriage ended in 1533. Despite enjoying a relatively long marriage to Henry VIII, Catherine fell out of royal favour when she failed to produce a male heir to the throne.

Her letter to the pope was successful, but perhaps not as she would have wished. The pope’s refusal to annul the marriage paved the way for the English reformation.

The letter, signed ‘Katherina’, is the centrepiece of an auction by auction house Ader Nordmann entitled ‘Femmes, lettres & manuscrits autographes’ (which translates as ’Women: signed and handwritten letters and manuscripts’). This is a collection of letters written by women across six centuries of history, which forms a 434-page catalogue. The collection is being sold by Claude de Flers, whose family of academicians – members of the Académie Française – built it up over the course of five generations, beginning in 1820.

Alongside Catherine of Aragon’s missive are pieces by Lucrezia Borgia – daughter of Pope Alexander VI – Mary Tudor and Marie Antoinette. There is a letter from Katharine Hepburn to Coco Chanel and a letter signed by Napoleon Bonaparte’s wife, Josephine. A copy of Napoleon’s 1796 marital contract with Josephine was sold at auction for €350,000 in France in September 2014.

In a sweet touch, the collection includes a note from Princess Grace of Monaco in which she apologises to her daughter’s teacher for her not having done her homework.

Another is by Brigitte Bardot, urging a record company not to release her stirring and controversial duet Je T’Aime … Moi Non Plus with chanteur Serge Gainsbourg, after her husband objected.

Supplication, it seems, is a common theme for women’s epistolary efforts all the way from the 16th to the 20th century, particularly for those with powerful husbands. Plus ça change.

However, there are some displays of courage among the letters. Ader Nordmann spokeswoman Sylvie Robaglia said: "The letters reveal how strong these women are". In Catherine’s letter, "we see her defending the throne for her children; she is showing herself to be a mother before all else, before being the Queen".

What is the problem with criminalising controlling behaviour?
This site uses cookies. Find out more. Continued use of this site is deemed as consent.   CLOSE ✖