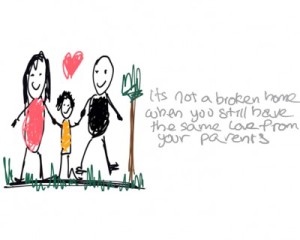 Amicable co-parenting has just got a ringing endorsement from an unlikely source…and it’s gone viral online.

9 year-old Azka Corbuzier from Indonesia is very happy with his family life – even though his parents are divorced – and he decided to make a video to tell the world that divorce doesn’t have to mean a ‘broken home’ for a child.

The video, complete with tear-jerking backing music, follows a series of slides showing child-like drawings to tell his parents’ story through his eyes. Starting with the couple meeting, marrying and having a child before starting to argue, the three minute video then takes the audience through the aftermath of their breakup.

Instead of it being a negative, alienating experience for young Azka, he realises that he still gets the love of both parents, and in fact, they’re happier apart: “they never fight anymore”. Azka is happier too, because his parents told him he didn’t have to choose between either parent. He lives with his dad, but his mum lives close by, and “we still go to malls and abroad together”, he says.

People ask what it’s like to be a ‘broken home kid’, but he says touchingly: “the fact is nothing is broken…they just not husband and wife but still my parents.”

The son of a well-known TV presenter and illusionist in Indonesia, Deddy Corbuzier, who is known for his quirky makeup-wearing public persona, it seems that young Azka is following in his dad’s celebrity footsteps. Azka reckons he may be the youngest Indonesian star on YouTube, and he’s already garnered a staggering 60,000 followers on Instagram.

Divorce is still a taboo subject in Muslim- majority Indonesia, and Aska’s parents’ divorce – between his Muslim mother and Catholic father – was particularly high profile given the father’s celebrity status. Nevertheless, young Azka seems to be seeing the bright side.

The video, entitled ’Story of a Broken Home Kid’ has, at time of writing, racked up over 400,000 views on YouTube and it has provoked an outpouring of support on social media from other children and their families.

Divorce in Hampshire: future-proofing your assets
This site uses cookies. Find out more. Continued use of this site is deemed as consent.   CLOSE ✖