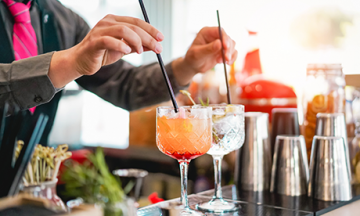 The marriage of restaurant tycoon Richard Caring, who owns a string of London restaurants including The Ivy, Le Caprice and Sexy Fish, is said to be over. It has been reported that he has moved out of the North London home he shares with his wife, and former model, Jacqui Caring. The couple met in the 1970s at a fashion show Jacqui was modelling in. Jacqui reportedly gave up her modelling career within three days of meeting Richard and threw herself into their relationship. The couple have been married for more than 40 years and have two adult children. Throughout most of their marriage they lived in an opulent home in Hampstead, nicknamed “The Versailles of Hampstead’. The Carings also own a penthouse apartment in Hong Kong and a 50-acre shooting estate in Somerset. Rumour has it that Richard, 68, and Jacqui separated back in February and that Richard has since moved into a £32 million property in St John’s Wood with 35-year-old Brazilian Patricia Mondinni, with whom he has a child. Richard Caring made his fortune in the rag trade after leaving school aged sixteen. He is now estimated to be worth £700 million after a number of lucrative investments in the London restaurant and club scene. He also invested in the now defunct BHS under Sir Philip Green’s reign, resulting in a £93 million payday. Sir Philip Green went on to sell BHS for £1 (and a £571 million pension deficit) before it went bust. The couple’s two sons work in their father’s business empire, which includes a 30% stake the Soho House private members’ club group. At present, there has been no comment from the couple themselves but, if the divorce was to go ahead in London, this long and wealthy marriage may result in the largest settlement ever awarded by the English courts. To date, the largest award of the court was to Jamie Cooper-Honn for £337 million.

House of Commons reviews no-fault divorce
This site uses cookies. Find out more. Continued use of this site is deemed as consent.   CLOSE ✖