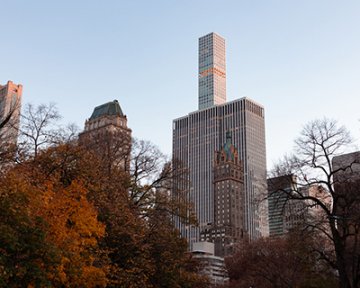 Following claims that Mr Macklowe is leaving wife Linda Macklowe for a new girlfriend—Patricia Landeau, president of the French Friends of the Israel Museum—Page Six reports that sealed divorce papers have been filed in New York.

Mr Macklowe, who has an estimated net worth of $2 billion, made his fortune developing office and residential properties after founding Macklowe Properties in the mid-1960s. Previous projects undertaken by Macklowe Properties include the striking Apple glass cube and the Metropolitan tower in Manhattan, but the developer has been most recently making headlines for the construction of 432 Park, a 1,396 foot-tall condominium tower consisting of 96 stories.

Of the gargantuan structure, Mr Macklowe has previously mused “It’s almost like the Mona Lisa…Except instead of it looking at you, you’re looking at it wherever you are. You can’t escape it.”

The da Vinci reference, though somewhat tenuous, is perhaps not surprising considering the Macklowes’ renowned art collection, which is also up for grabs in the divorce. Allegedly worth $1 billion, the collection includes works by Franz Kline, Marth Rothko and Gerhard Richter and was “spearheaded” by Mrs Macklowe.

According to the Daily Mail, it is understood that Mr Macklowe “did not sign a pre-nuptial agreement before marrying his wife”. New York is an equitable distribution state, meaning that all marital property should be divided fairly, although this doesn’t necessarily mean that assets are split up equally. In distributing property upon divorce, New York divorce law takes into account several factors, including “joint efforts or expenditures and contributions and services as a spouse, parent, wage earner and homemaker, and to the career or career potential of the other party”, and “the duration of the marriage and the age and health of both parties”.

One would expect these factors to have particular bearing on the Macklowe case—both parties are 78 years-old, were married for 57 years and had two children together. A Daily Mail source claims that the split comes as “shock to everyone”.

Victory for Vardags in our first match of the Archie David Cup
This site uses cookies. Find out more. Continued use of this site is deemed as consent.   CLOSE ✖