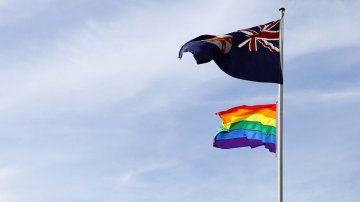 "What a day for love, for equality, for respect," said Australia’s Prime Minister Malcolm Turnbull of the news that the House of Representatives had passed a bill legalising same-sex marriage in Australia. Same-sex couples who have married overseas or who go on to do so, will also have their marriage automatically recognised in Australia. On the 9 December, Australia joined the twenty-five other countries where equal marriage is now a legal right. Celebrations were had across the country as crowds gathered to commemorate the day that their fight for equality was won. Liberal MP Tim Wilson, speaking in the House of Representatives, even took the opportunity to propose to his long term boyfriend, Ryan Bolger.

While many politicians expressed their joy on the momentous day that parliament passed the bill, others expressed their opposition. Deputy Prime Minister Barnaby Joyce said that marriage “is a special relationship between man and a woman for the purposes, if you are so lucky, for bringing children into the world”. Australia has been divided in opinion for many years. For some, this possible legalisation of same-sex marriage was seen as a threat to their religious view. A Christian couple went as far as to pledge that they would divorce in the event of same-sex marriage becoming legal. The couple have retracted this promise following the vote and the government has now appointed a panel which will consider how religious freedoms may be protected. However, under the Australian Constitution, the right of a church or other religious organisation to waive same-sex couples, whether to marry or use their facilities, will be protected.

Following over a decade of debate, Australia held a non-binding vote in mid-November, where the country was asked if it supports same-sex marriage. The Australian Bureau of Statistics stated that 61.6% of those who participated had voted in favour of allowing same-sex marriage. The vote itself became quite heated; the media was awash with reports of former prime minister and known opponent of same-sex marriage, Tony Abbot being head-butted, as well as reports from individuals saying they faced unfair treatment at work if they did not show support for same-sex marriage. The Senate went as far as to pass legislation banning intimidation, threats and vilification during the vote, adverts were also required to be approved and broadcasters had to ensure that opposing views were also given air time.

The first Australian same-sex marriage is already in the pipeline; despite not knowing if it would be legal by the time of their set date, Stephanie Dyball and Megan Stapleton of Melbourne had chosen the date for their wedding over a year ago. It is thought that the couple will be wed next Thursday, less than a fortnight after the same-sex marriage bill was given effect.