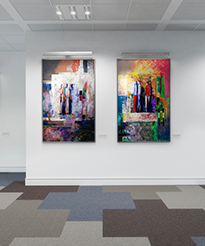 This June, a previously unseen self-portrait by Lucian Freud will be unveiled at the National Portrait Gallery, as part of a small public display of the artist’s portraits. The gallery acquired the painting through the ‘Acceptance in Lieu’ scheme, which enables liable taxpayers to offset inheritance tax by donating objects ’of particular historic, artistic, scientific or local significance’ to the state.

The portrait, a fragment of which can be viewed here, was never finished, yet will settle nearly £560,000 of outstanding tax. It will become part of an existing archive at the National Portrait Gallery, which includes the late artist’s sketchbooks, drawings and letters, also allocated through the scheme. In addition to this treasure trove, Freud’s personal collection of Frank Auerbach artworks will be distributed across a number of UK galleries, in order to settle a staggering £16 million tax liability.

Freud passed away in 2011 at the age of eighty-eight, and the beneficiaries of his £96 million estate have been shrouded in mystery. Giving credence to the stereotype of artists living passionate, volatile personal lives, Freud fathered at least fourteen children, from his first marriage and a smattering of love affairs. Yet only one daughter, Rose Pearce, was a named beneficiary in his will, with the entire fortune seemingly split equally between Pearce and Freud’s friend and solicitor Diana Rawstron. However, as reported by The Telegraph, the pair ’later revealed the painter had instructed them to hold the money in trust for others, whose identity was to remain a closely guarded secret’. Despite a legal bid by one of Freud’s sons to challenge the secrecy of his father’s will, its contents remain under wraps.

Through the Acceptance in Lieu scheme, a UK taxpayer may offer to transfer culturally significant objects into the public domain as a tax payment. As outlined by the Arts Council, offers must be made to HMRC and approved by Culture Minister, ’who is advised by Arts Council England’s AIL Panel’, which consists of various art experts.

The Arts Council states that those wishing to make an offer must provide the following information:

In the previous financial year, the scheme was permitted to write off up to £40 million of tax. That said, AIL panel Chair Edward Harley stressed that ’it would be unwise to see this amount as a target which has to be spent’, and ’only works of pre-eminent importance’ would be accepted under the scheme.

Of course, art, by its very definition, is subjective, and commenters on the boards of the first media outlets to report the Freud story bemoaned the fact that, despite being unfinished, the portrait enabled such a significant chunk of tax to be written off. However, consider the fact that Pregnant Girl, an earlier painting by Freud recently sold for £16 million, and the amount looks considerably less excessive.

Furthermore, the fact that the portrait is unfinished does not necessarily detract from its significance. In fact, it could even be seen as enriching it. Just ask the artist himself:

"A moment of complete happiness never occurs in the creation of a work of art. The promise of it is felt in the act of creation but disappears towards the completion of the work… Until then he had almost dared to hope the picture might spring to life."

My second best bed: new x-rays of Shakespeare's will offer fresh revelations
This site uses cookies. Find out more. Continued use of this site is deemed as consent.   CLOSE ✖