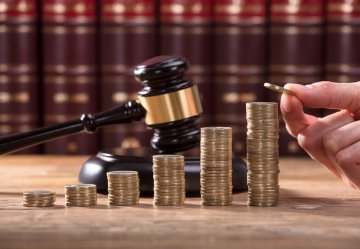 After 11 years of marriage, one half of ITV’s double act Ant and Dec, Ant McPartlin, has announced his divorce from his wife Lisa Armstrong. After decades in showbiz, Ant’s success helped build their £62 million fortune which is due to be divided equally. This is therefore on track to be the largest known divorce settlement involving a UK celebrity. News of the split comes after Ant has returned from rehab where he was being treated for depression and addiction.

Ant, 42, met Ms Armstrong, 41, in Newcastle in the mid 1990s at a Smash Hits concert while he was performing with Dec as PJ & Duncan and she was an aspiring pop star in Deuce. He proposed in Dubai then the young couple married in 2006 in Taplow, Buckinghamshire, with Dec as best man. Ant and Dec went from strength to strength in their career as Ms Armstrong excelled as a make-up artist. The pair, although trying for years to conceive, never had a child together.

In 2015, Ant reportedly developed a serious addition to super strength painkillers following a knee operation. Swallowing them down with alcohol, his situation soon became more severe and resulted in his admittance to rehab. Ant was released last year and acknowledged that “this kind of stuff puts strains on any marriage.”

Compounded with this, Ant was said to be spending more time away from home and working around the clock. During much of the end of the partnership, Ant was on the road filming Britain’s Got Talent, Saturday Night Takeaway and I’m a Celebrity.

Last Sunday, Ant’s spokesman announced that the star was “very sad” to be divorcing his wife and asks for privacy. The motivations put forward were for Ant to take back control of his own life and health and let Ms Armstrong move on.

The Sun reports that Ant wants to make the divorce “as easy as possible” for Ms Armstrong after the difficulty of the past few years. It has become apparent that Ant will be agreeing to a 50/50 split of matrimonial assets so to achieve a clean break and avoid acrimony. Last year, Ant earned an astounding £39,000 a day through his TV enterprises, but Ms Armstrong as Head of Make-Up at Strictly Come Dancing was bringing in a high salary too. Together the pair have a hefty £62 million fortune, including a £6 million home in West London and a luxury holiday home in Portugal. Having lived together for eight years prior to marrying, the pair built up this wealth together, the vast majority during the marriage. Since the courts of England and Wales treat marriage as a partnership, regardless of the financial contribution of each party, the total sum will be split equally. Through engineering a clean break of equal assets, Ant will have no outstanding maintenance obligations and the pair will not have to be dragged through court.

Although the circumstances surrounding this divorce are complex, this is an excellent example of a celebrity couple working to part ways amicably despite the odds. However, after an 11 year marriage and 23 year partnership, Ms Armstrong is entitled to half of the fortune whether the divorce proceeds with or without animosity.

Irish ‘best friends’ marry to avoid paying inheritance tax
This site uses cookies. Find out more. Continued use of this site is deemed as consent.   CLOSE ✖