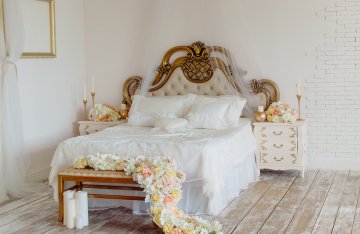 Any Friends fan will be able to recall Ross and Rachel, post-Vegas, post-drunken-wedding, and remember that they were desperate to annul their marriage on the basis that it had not been consummated. Britney Spears hit the headlines a few years back for annulling her Vegas wedding on the same grounds.

Outside the world of Las Vegas weddings, annulment on the grounds of lack of consummation is entrenched in English matrimonial laws for heterosexual marriages.

Consummation has long been a crucial part of marriage. Bedding rituals used to be an important part of the wedding ceremony. The families of newly-married couples would take steps to ensure that the marriage had been consummated. Part of this process was to prove that the bride had been a virgin before the wedding. The bedsheets would be taken away the day after the wedding night, to be examined for traces of blood – the ultimate sign of virginity and its loss. This tradition dates back thousands of years, and was particularly important to royal weddings.

Under section 12 of the Matrimonial Causes Act 1973, a refusal or inability to consummate a marriage is a ground of annulment in England and Wales.

So what does ‘consummation’ actually mean? Technically, consummation of a marriage requires ‘ordinary and complete’, rather than ‘partial and imperfect’ sexual intercourse. ‘Incapacity’ must be physical or psychological. It may not prevent intercourse with anyone other than the spouse, but must be permanent and incurable. The fact that the parties may have had successful intercourse before the marriage is irrelevant if the incapacity existed at the time of the marriage.

Potter v Potter 5 Fam Law 161, CA: W was physically unable to consummate the marriage. Having undergone surgery, H and W were prevented from having sex by W’s emotional state. H then declined to try to have sex again and W petitioned for annulment on the grounds of H’s wilful refusal to have sex with her. The judge dismissed the petition. W’s appeal failed. H’s refusal was judged to be the result of his loss of sexual ardour rather than a deliberate decision.

Ford v Ford Fam Law 232: This was a particularly interesting case, because H and W had had a sexual relationship before the marriage. H was sent to prison. H and W married while he was in prison. Following the marriage, H refused to consummate the marriage, and later said that he did not want to live with W, even after he was released (instead, opting to live with an ex-girlfriend upon release). W’s petition was successful: H’s refusal to consummate the marriage in prison was not a ‘wilful refusal’, but his clear determination never to do so was sufficient.

A v J (Nullity) 1 FLR 110: H and W were of Indian ancestry, and took part in an arranged civil marriage, which was to be followed by a religious ceremony some four months later. Between the two ceremonies, they spent only a few days together, because of H’s work in the USA. Shortly before the religious ceremony (which it was accepted was a prerequisite to consummation), W refused to go ahead with it, giving as her reason H’s apparently uncaring and unloving attitude towards her. H apologised and said he had supposed a formal relationship would be appropriate until they were ‘properly married’, but W refused to accept this apology and maintained her refusal to go through with the religious ceremony. H was granted a decree of nullity for W’s wilful refusal to consummate the marriage.

We should note, however, that all this only applies to heterosexual and not to same sex couples. Paragraph 4, Schedule 4 of the Marriage (Same Sex Couples) Act 2013 specifically excluded non-consummation as a ground for the annulment of a same sex marriage. Civil partnerships were also completely ‘de-sexualised’. There are those who see annulment on the grounds of non-consummation as ‘a legal oddity’ in the light of the legislation governing same sex marriage.

Alternative dispute resolution: arbitration
This site uses cookies. Find out more. Continued use of this site is deemed as consent.   CLOSE ✖