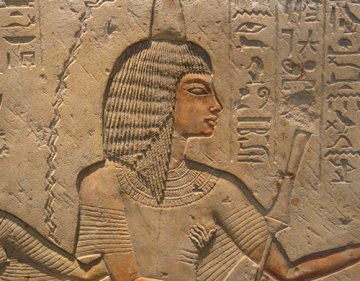 As Dr Amanda Foreman has been showing in her BBC series, The Ascent of Woman, not all societies have been patriarchal - or certainly not as patriarchal as British society in the last few centuries.

When it comes to marital contracts, especially prenuptial agreements, the women of Ancient Egypt were a step ahead of our times.

A collection of ancient Egyptian scrolls on display at the Oriental Institute of the University of Chicago shows that women could negotiate their terms on marriage.

One such contract – an eight-foot scroll 2,480 years old – shows a wife’s request that, if the marriage decayed, she would be adequately provided for thereafter. Written in demotic script – a kind of hieroglyphic shorthand – she asked to be given ’1.2 pieces of silver and 36 bags of grain every year for the rest of her life’.

Emily Teeter, an Egyptologist at the Institute, told the Atlas Obscura website: ’Most people have no idea that women in ancient Egypt had the same legal rights as men’. Egyptian women could sue and be sued, serve on juries and stand as witnesses, regardless of their marital status. They could also own property, placing them well ahead of English women even by the nineteenth century.

Crucially, Egyptian women at this time could get divorced and expect maintenance for life - and would set their terms out in writing before the marriage.

These contracts were certainly advantageous for wives, according to professor Janet H. Johnson, and entirely focused on economics - there were no clauses about conduct during the marriage.

Grandparents win right to raise child
This site uses cookies. Find out more. Continued use of this site is deemed as consent.   CLOSE ✖