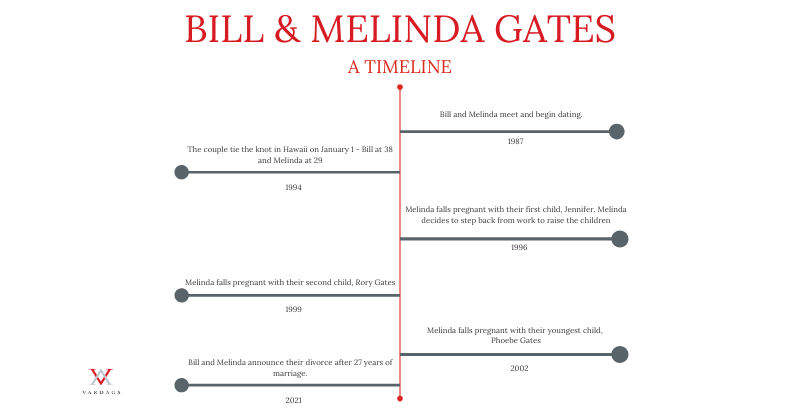 In a synchronised statement published earlier today on their social media feeds, Bill and Melinda Gates announced they will divorce after 27 years of marriage. The pair, who married in 1994, have an estimated worth of over $100 billion and have three adult children: Jennifer, Rory and Phoebe.

Despite vowing to “continue our work together at the foundation”, the couple said that they “no longer believe we can grow together as a couple in the next phase of our lives.”

In 1987, Melinda joined Microsoft as a product manager and soon after, Bill and Melinda began dating. At this stage, Gates was already the youngest billionaire ever.

The pair got married in 1994 on the Hawaiian island of Lanai and reportedly hired the entire local fleet of helicopters to prevent unwanted guests from hovering overhead.

In 2000, the couple established the Bill & Melinda Gates Foundation with the aim of improving public health and education and tackling climate change.

With over $51 billion of assets, it is believed to be the largest private foundation in the world. Last year, Bill Gates stepped down from the Microsoft board to focus completely on his charitable endeavours.

Alongside the work of the foundation, both Melinda and Bill are driving forces behind the Giving Pledge, a commitment by the world’s wealthiest to give away the majority of their wealth. Mackenzie Scott is another signatory to the pledge, having signed up shortly after her divorce from former husband Jeff Bezos.

In an interview with the Associated Press in 2019, Melinda described their professional relationship as that of “equal partners”, saying this had been strengthened by their work together at the foundation.

According to figures published by Forbes, Bill Gates has an estimated net worth of $124 billion, making him the fourth richest person in the world. Alongside this personal wealth, the Bill and Melinda Gates foundation has assets worth over £36 billion.

The majority of Bill Gates’ wealth is no longer tied to Microsoft – when he stepped down from the board in 2020, he donated roughly $35.8 billion of his stock to the Gates Foundation leaving him with just over 1% of the total shares in the company.

Bill’s biggest asset is Cascade Investment – a holding company he established with the money generated by sales of his Microsoft stock. The company, run by Michael Larson, has interests in a range of fields from hospitality to energy as well as stakes in various public companies, including Deere & Co.

The couple also have a range of luxurious properties dotted around the US, with the most famous being their main residence of Xanadu 2.0 in Medina, Washington. The property, which cost $63 million to build, is valued at $125 million. The couple also own a 4.5-acre ranch in Wellington, Florida the 228-acre Rancho Paseana in California, which he purchased for $18 million, and an oceanfront home in Del Mar, California which cost roughly $43 million.

Beyond property, Gates owns a collection of classic cars and artwork, including the Winslow Homer painting which Gates paid $36 million for in 1988.

The divorce petition was filed in King County, Washington and their divorce will therefore be subject to the laws of Washington State.

As a community property state, anything acquired during a marriage is considered martial property to be divided equally between the partners. The goal, according to Washington State law, is to achieve a “fair and equitable” distribution of the marital assets and while this ensures that any decision will be balanced, it does not mean a 50:50 split.

According to TMZ, who obtained the court documents, Bill and Melinda Gates do not have a prenup.

The couple did announce, however, that they have drawn up a separation agreement. In the divorce filings, the couple requested for their real property, personal property and debts to be divided according to the terms of this contract. By agreeing to a private settlement, the Gates will be able to keep most of the financial settlement out of the public eye, in much the same way as Jeff and Mackenzie Bezos did in 2019 during their divorce.

Despite the announcement of their divorce, the couple have stated that they will continue to work together heading up the Bill and Melinda Gates foundation. This was included in both their social media posts and in an internal email sent to employees of the foundation which said they will remain as executives and co-chairs.

Melinda Gates filed the divorce petition in the late afternoon of the 3rd of May and the pair are scheduled to appear in court in April 2022. Their Alternative Dispute Resolution session is pencilled in for the month before, in March 2022.

ONS: Divorces increased by 18.4% in 2019
This site uses cookies. Find out more. Continued use of this site is deemed as consent.   CLOSE ✖