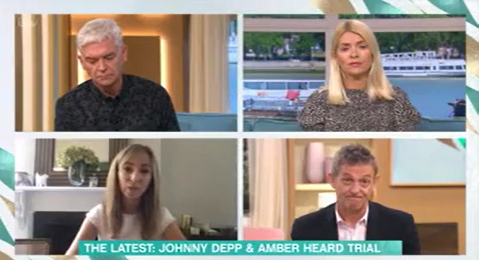 Johnny’s Depp sensational libel case began in the High Court yesterday, with the Hollywood star suing News Group Newspapers, the publisher of The Sun, over an April 2018 article that referred to him as a “wife beater.” This allegation relates to his tempestuous marriage with fellow actor Amber Heard, which lasted from 2015 to 2017.

The article in question was headlined: “Gone Potty: How can JK Rowling be ‘genuinely happy’ casting wife beater Johnny Depp in the new Fantastic Beasts film?”. The words “wife beater” were removed from the headline the following day and the term was not used in the print edition although Mr Depp still argues that the article caused “serious harm to his personal and professional reputation.”

In order to explain the intricacies of this case, which lawyers for NGN unsuccessfully tried to throw out last week, Alexandra McCready, Head of Reputation and Privacy at Vardags, was invited to appear on ITV’s This Morning.

For Hollywood celebrities like Depp, money is unlikely to be the motivation for such libel action. Instead, McCready argued, the motive is vindication: “Depp’s legal team have made very clear that the case is very much about vindication and clearing his name. He has come to court to try and do that and tackle and challenge the allegations made by the Sun that he is a “wife beater.”

This process, however crucial to Depp, will not be easy.

“Essentially, what the Sun is looking to do is to defend the allegations that they made that he is a ‘wife beater’ and prove that they are true. So to do that, they’re going to have to place intense scrutiny on Depp and his reputation and private life in order to do that. There will be an awful lot of dirty laundry and very private details aired by both sides in order to prove their case.”

This move also involves significant risk. “This is,” McCready argued, “a real roll of the dice for Johnny Depp. If he doesn’t do this, if he doesn’t take his stand, his career will be hugely affected.

“But, if he loses, of course there is a financial implication but the main downside is that he hasn’t vindicated his reputation. So essentially, a court has said they think there is sufficient evidence to justify calling him a ‘wife beater.’ That would obviously be horrendous for both is career and his reputation.”

Another potential impact of Depp winning this case is its effect on the media. McCready, however, doesn’t believe it will lead to significant change: “Obviously there is a financial implication for the Sun but I don’t think it will stop or change how they report these things. As Matthew [Wright] said, I don’t think this will have a long term impact on the press – the people it will have a long term impact on is Depp and Heard.”

The case currently being heard is the second part of proceedings, with NGN trying last week to have the case thrown out. With the start of the second case, the onus has changed as McCready explains: “In the first instance, it was for Johnny Depp to prove that the allegations caused serious harm to his reputation.

“Given the obvious nature, and severity, of the allegations this is not difficult to do. After that, the burden shifts to the Sun to prove that the allegation that he is a ‘wife beater’ is substantially true. This is why we have a three week trial, two star witnesses and other Hollywood A List celebrities coming into town to prove this.”

The trial is scheduled to last for three weeks and will include testimony from Depp’s former partners Vanessa Paradis and Winona Ryder.

Is it time the legal world embraced AI?

Brexit, the Lugano Convention and why millions of expats may face two divorce cases
This site uses cookies. Find out more. Continued use of this site is deemed as consent.   CLOSE ✖