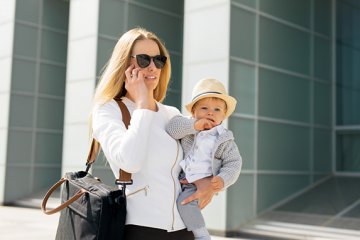 A report published today by the Institute for Public Policy Research (IPPR) shows a marked shift in the way families work – both inside and outside the home – across Europe. In Britain today, one-third of working mothers are the principal breadwinners in their families.

This upward swing in maternal earning has been fuelled partly by a rise in employment among single parents over the past twenty years; single parents are far more likely to be women. However, it was also pushed up by an increase in working mothers within coupled households, with a very sharp increase taking place during the recession-hit years between 2008 and 2011.

While this would seem to point to an increase in gender equality, there is some bad news. In Britain, the report found that most of the 2 million-odd working mothers who are the main breadwinners are low earners. So, while they’re carrying a heavy financial responsibility, they’re not necessarily flourishing.

This is different to working mothers in the Netherlands, where there’s a more even distribution of working mothers across different income brackets. So this does not indicate a triumph for gender equality. While women are putting in the work and caring for children, they are not seeing a proportional growth in their pay packets.

Giselle Cory, a senior research fellow at IPPR and lead author of the report told The Telegraph that the rise in maternal breadwinners since the recession is “likely to be linked to the sharp fall in male employment at the onset of the recession, rather than a rise in female earnings".

The IPPR report puts forward some recommendations to the UK government to ensure that gender equality keeps moving forward in terms of the balance between men’s and women’s paid employment and parental responsibilities. These included: working to close the gender pay gap, improving flexible working arrangements, improving options for parental leave and ensuring greater availability of affordable, high-quality childcare.

The report can be read in full here.

Guidance on radicalisation issued by President of the Family Division
This site uses cookies. Find out more. Continued use of this site is deemed as consent.   CLOSE ✖