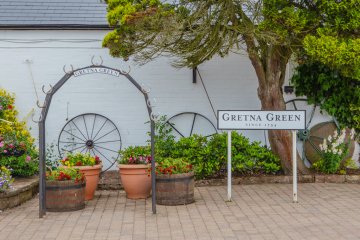 ’Gretna Green indeed, is as superior in reality as it is in name. It looks as if it were the capital of the God of Love’. Robert Smith Surtees, ‘The Richest Commoner in England’, New Monthly Magazine, 1848.

References to Gretna Green litter high and popular culture – it appears both in Austen’s Pride and Prejudice (where Lydia Bennett elopes with ghastly George Wickham), and in Downton Abbey. The history of Gretna Green highlights how a different law north of the border can be very attractive, at least where the laws of love are concerned.

It often surprises people to learn that family law is not the same in England and Wales as it is in Scotland. Back in 1754 Lord Hardwicke’s Marriage Act was passed. It stipulated that, if a parent of a minor (a person under the age of 21) objected, they could legally veto the union.

It did not take long for couples in England to realise that the law did not apply in Scotland, where it was possible for boys to wed at fourteen without consent and girls at a mere twelve.

By the 1770s, with the construction of a toll road, Gretna Green became the first easily reachable village north of the Scottish border.

Scottish weddings were even more attractive by virtue of Scottish law allowing for ‘irregular marriages’, whereby almost anybody had the authority to conduct the marriage ceremony, provided there were two witnesses. The blacksmiths in Gretna Green earned the title of ’anvil priests’ – and their place in Scottish history! – as they would make the rings as well as performing the marriage ceremony for couples fleeing their parents’ veto.

Despite pressure from the English government on the Scots to adopt Lord Hardwicke’s marriage act, Scotland refused. It was not until 1856 that Lord Braugham passed a law necessitating residence in Scotland before the wedding. After this, if a couple wished to marry in Scotland, one of them had to spend twenty-one days living in the country beforehand. This was commonly referred to as the ’cooling-off’ act, but it did not deter all young lovers. Instead, Gretna Green became popular as a venue for young couples to ’reside’. Locals even offered their hay barns as lodgings.

In 1940, ‘Anvil Weddings’ were outlawed. Only the registrar could legally marry couples, and the local blacksmith’s role was restricted to creating objects only instead of both objects and marital unions. The ’cooling-off’ period remained.

Gretna Green, however, continued to attract young couples who wished to defy the wishes of their parents by marrying without consent. In England, any couples under twenty-one were unable to marry without the consent of their parents, but in Scotland the age was just sixteen.

In 1977, the ’cooling-off’ period was repealed, marking an end to the residence requirement. Although the age of consent for marriage was lowered to eighteen in England, it remained sixteen in Scotland, and Gretna Green thus retained popularity for young teens wishing to wed.

In 1985, no doubt captivated by the romance of the blacksmith’s shop, a young bride succeeded in persuading a Church of Scotland minister to marry her over the anvil of the Famous Blacksmiths shop. This wedding set precedence for others wishing to have a ceremony in the same venue.

When an alteration to Scotland’s Marriage Act allowed civil ceremonies to take place in licensed premises, the famous Blacksmiths Shop applied for a license and was granted the right to perform both religious and civil ceremonies.

Now, thanks to further changes in the law, Gretna Green welcomes all couples for their special day. One in six Scottish weddings take place at Gretna Green and the famous Blacksmiths shop retains its place in both the history books and popular culture.

Gohil v Gohil: A battle over disclosure
This site uses cookies. Find out more. Continued use of this site is deemed as consent.   CLOSE ✖