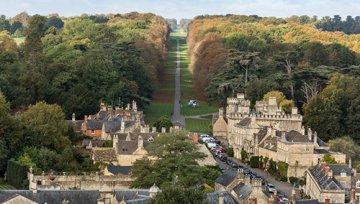 Gloria, the Dowager Countess Bathurst, widow of the 8th Earl Bathurst (known as Henry ‘Barmy’ Bathurst) is involved in a legal battle with the current earl over the family’s stately home at Cirencester Park in Gloucestershire.

The Dowager Countess, 86, is the second wife of the 8th Earl who divorced his first wife and mother of his three children in 1976. Her stepson Allen, 56, is the 9th Earl Bathurst and inherited the estate at Cirencester Park, Gloucestershire upon his father’s death in 2011. The Dowager Countess has found herself in a disagreement with her stepson over her late husband’s will.

The dispute is over whether or not Gloria has the right to the ‘use and enjoyment’ of the estimated £13 million worth of family heirlooms, including a £6 million regency portrait of the Duke of Wellington. The trustees of the estate are trying to prevent her from being able to enter the stately home. Gilead Cooper QC, representing one set of trustees, told Judge Simon Barker that the Dowager Countess had requested inspection of the heirlooms and suggested that this demand was a “flimsy pretext” to gain entry to a house where, it is claimed, she knew she was not welcome. There was extensive work to compile an inventory of all the goods taken on behalf of the trust. The Earl who currently lives int the property stated that the process was “intrusive” and that his stepmother was still not satisfied after days were spent searching the estate.

The family are also concerned that the collection, said to be of “national and historic importance”, is in danger of being split up. This in itself is enough to seriously affect the value of the heirlooms. Further, given the ancient lineage of the family, the Earl is conscious that his family “are only custodians, and we want people to share and see these things ”.

The Earl has made it clear that his stepmother was by no means neglected in the will of his late father. In 1963, the estate was divided with one half given to the 9th Earl and the other to the Dowager Countess- both in trust. The agreement was that the latter would have use of that wealth for the rest of her life after the 8th Earl’s death but the remains would revert back to the family after she dies. The stepson reiterated that “she has a lovely Cotswold farmhouse, and other properties and land of which she is the principal beneficiary or owner.”

It was put before the High Court that the relationship between the current Earl and the Dowager Countess “is not cordial”. This is not the first dispute that the two have had. In 2013 the Dowager Countess closed down Cirencester Hospital car park on the land that she owns which caused the 9th Earl a great deal of embarrassment due to his position on the Cirencester Hospital League of Friends.

The current case will require an extremely technical interpretation of the 8th Earl’s will. The judge will make a decision on whether the ‘use and enjoyment’ of paintings and other artefacts gives the Dowager Countess the right to visit the stately home and inspect its contents. It is a storyline that would not be misplaced should it feature in ‘Downton Abbey’ but this is real life high society dispute will hopefully be resolved following the judgment in December.

A person charged with looking after property on behalf of the beneficiary.
“Ayesha Vardag - Britain’s top divorce lawyer.”

Deputyship and last power of attorney: a comparison
This site uses cookies. Find out more. Continued use of this site is deemed as consent.   CLOSE ✖