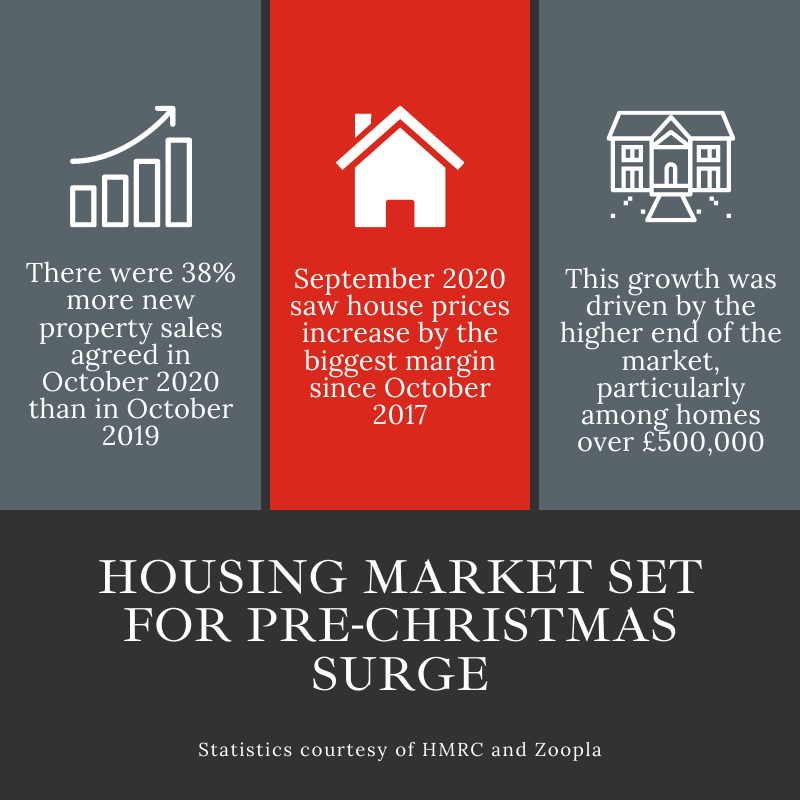 According to a survey conducted by property website Zoopla, the housing market is set for a pre-Christmas spike as buyers try to complete deals before the end of the stamp duty holiday in March.

The website published data showing that the number of property sales is far exceeding the rates recorded last year, with the total number of new property sales agreed being 38% higher than at the same point in 2019.

Zoopla also predicted that this would continue over the festive period, with over 100,000 more sales than usual by the end of March. This surge in demand has also affected house prices, with September seeing house price growth at its highest level since October 2017.

This trend is also reflected in statistics published by HMRC, with their data for October showing seasonally adjusted residential transactions being 8.1% higher than in 2019 and 9.8% higher than the previous month.

The reasons behind this spike are quite clear – a combination of pent up demand within the property market since March and the impact of the stamp duty holiday.

The surge is particularly pronounced at the more expensive end of the market as buyers, having been confined to their homes, seek to trade up to larger properties.

This was highlighted by Lucian Cook, director of residential research at Savills, who said:

“Sales being agreed have eased back by around 12 per cent since their highs over the summer and early autumn, which in part reflects less fresh stock being brought to the market at this time of the year.

“However, they remain well above levels seen in the same period last year, particularly in the market over £500,000. That suggests the experience of the second lockdown has reaffirmed people’s changed housing priorities, which is likely to support activity to the end of the stamp duty holiday.”