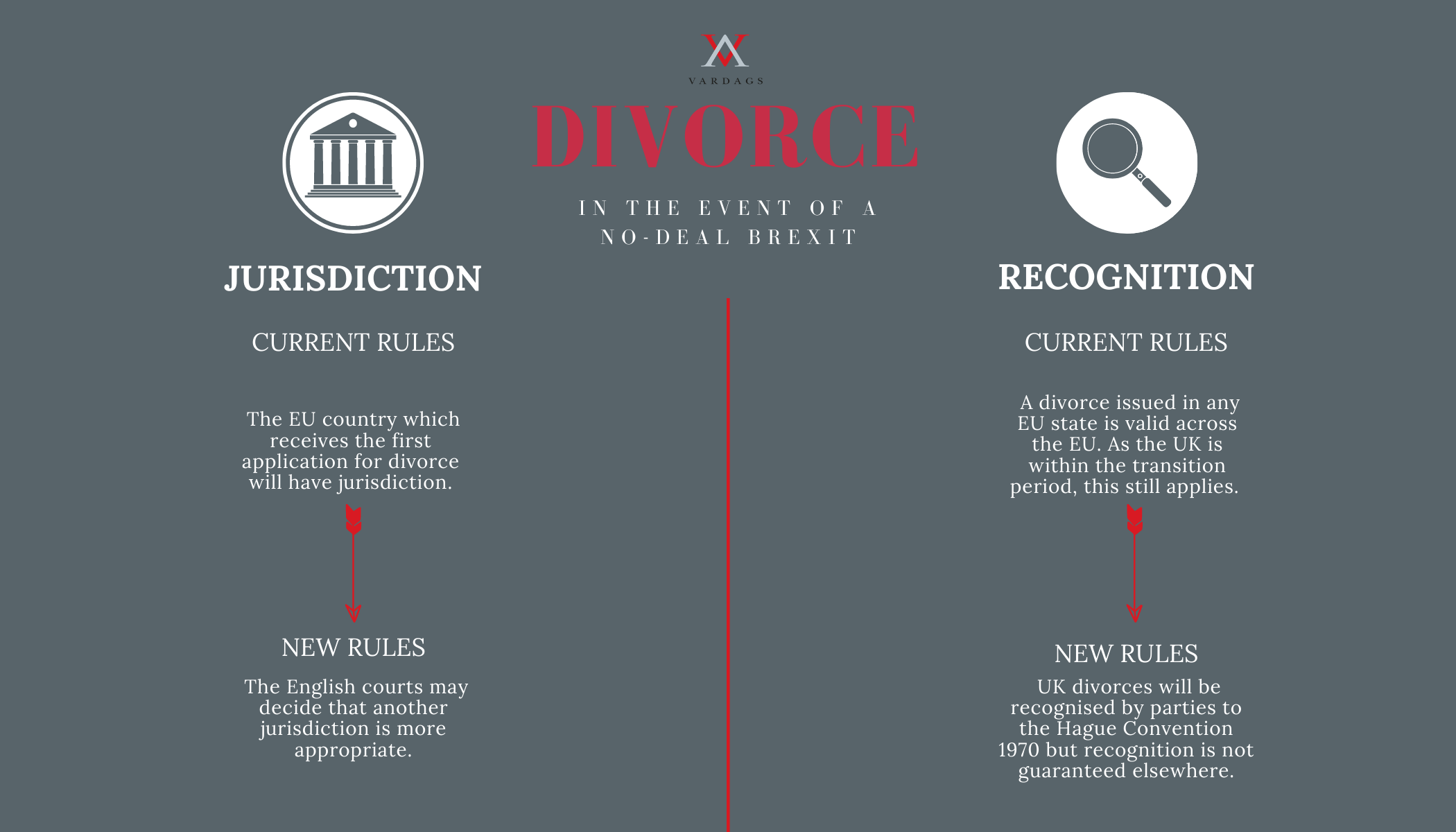 With time running out for the UK to agree a post-Brexit trade deal with the EU, the prospect of no-deal is becoming increasingly likely.

The UK’s future relationship with the European Union will have a significant impact across the board, and family law is no exception. So what are the implications for divorce if the UK does not agree a deal with the EU?

If no deal is agreed, two key stages of the divorce process will be significantly affected: jurisdiction and recognition.

Put simply, the lis pendens rule means that the EU member state which receives the first application for divorce will have ‘seised’ jurisdiction. It is essentially a “first past the post” system. While there are stipulations, for example, the Petitioner will need to prove a sufficient connection to that country, the timing of the application is the primary factor.

If there is no agreement between the UK and the EU to replace this regulation with something similar, Brussels IIa will cease to apply at the end of the transition period on December 31 2020. This will also mean that the lis pendens rule will cease to apply.

In its place, the UK will revert back to forum non conveniens, which was in place before Brussels IIa. This will mean jurisdiction disputes between the UK and a member of the EU will be decided in the same manner as non-EU forum disputes. The “first past the post” system will be removed and instead, the court which receives the first application may decide that another country is better suited to hear the case.

While we cannot know for sure the impact of this until test cases come through the courts, this may well result in lengthier court proceedings as both parties examine every detail of the parties’ connection to the competing jurisdictions.  It could also lead to conflicting decisions being made in more than one jurisdiction. The timing of the application may still play a part, as courts have the discretion to halt proceedings if there are proceedings occurring in another country, but it will no longer be the most important factor.

Currently, recognition of divorce is also governed by Brussels IIa. This means that UK divorces are automatically recognised throughout the EU and vice versa. At the end of the transition period, this will cease to apply.

In its place, the UK will revert to the 1970 Hague Convention on the Recognition of Divorces and Legal Separations. At present, 12 members of the European Union are signatories to this convention and so will likely recognise UK divorces after 31 December. For the 15 EU states which are not signatories, the situation is less clear.

Although it is difficult to see why these 15 states would refuse to recognise UK divorces, it is nonetheless important for solicitors to have regard to the requirements in any competing jurisdiction, to minimise any chance of a refusal to recognise.

No matter the eventual relationship between the UK and the EU, it will remain essential to seek out the best possible legal advice to ensure your divorce is heard in the most appropriate jurisdiction and is widely recognised. Vardags have significant expertise in international divorces, including complex jurisdictional disputes.

Lucy Williams shortlisted for the Manchester Young Talent Awards 2021 Legal Professional of the Year
This site uses cookies. Find out more. Continued use of this site is deemed as consent.   CLOSE ✖